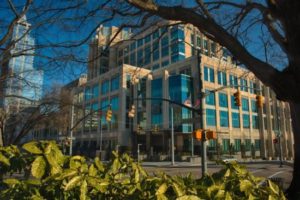 Now that Colon Willoughby has stepped down as Wake County District Attorney, the question on people’s minds is: Who will replace him? To date, six lawyers have stepped up to fill the vacancy; three of whom have worked as assistants for the District Attorney’s office.

As per the state’s constitution, it falls upon Governor Pat McCrory to appoint an interim District Attorney to fill the spot until a new District Attorney is elected in November. McCrory praised Willoughby’s performance in the 28 years he’s held the position.

“He was an important voice against white-collar crime and government corruption and the people of North Carolina are indebted to him for his exemplary public service,” McCrory said in the statement.

In his retirement letter, Willoughby praised the good lawyers who serve Wake County for properly representing both sides of any story. He also added the following reminder for Gov. McCrory:

Just like Raleigh lawyer and co-founder of Kurtz & Blum, PLLC, Howard Kurtz, Colon Willoughby received his undergraduate degree at the University of North Carolina in Chapel Hill in 1973. He received his Juris Doctor at Campbell University in Buies Creek six years later. Prior to his election as District Attorney in 1986, he worked for a local law firm after finishing law school.

During his time in office, Willoughby’s team tried numerous high profile cases. For almost 30 years, he oversaw the prosecutors who handled offenses ranging from serious felonies such as murder, robbery, rape and drug trafficking, to minor offenses like shoplifting and trespassing, as well as, white collar crimes like fraud and embezzlement.

In an interview with Campbell University’s Cherry Crayton, Willoughby said he found working on cases fascinating. However, his fascination was limited to the cases forwarded to the law firm he worked for prior to his election as District Attorney. Among the “interesting” cases he worked on involved the multimillion-dollar tobacco fraud scheme by former Lt. Gov. Jimmy Green.

Until a new District Attorney is sworn in next January, District Court Judge Ned Mangum is running the Wake County office. We do not know yet who will be elected as the new DA, but we are certain that it is the hope of every attorney in Raleigh, NC that whoever gets the job is fair and interested in the promotion of justice, not simply punishment.