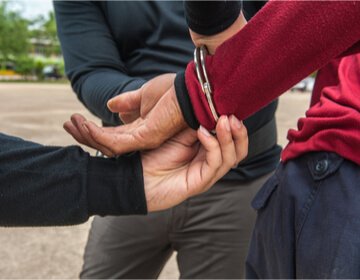 The potential punishment a person faces for drug crimes in North Carolina depends on the type and amount of drug involved in the arrest. Drug crimes under North Carolina law range from misdemeanor possession of drug paraphernalia or marijuana to felony possession of “hard” drugs, possession with intent to sell and deliver (PWISD), and trafficking in illicit drugs.

Regardless of the drug charge you face, a conviction would be costly and can hold you back in life for years to come. It is a mistake to just plead guilty to even a misdemeanor drug offense, and it is a bigger mistake to face drug charges on your own.

At Kurtz & Blum, PLLC, our Raleigh drug crime defense lawyers will sit down with you to review the charges against you and candidly explain what to expect in your case. Our collaborative team of highly skilled attorneys will discuss your case together to develop defense strategies that have considered every angle.

If you or a loved one has been arrested and accused of drug possession, distribution, or trafficking in Raleigh, Wake County, or elsewhere in North Carolina, contact us today to learn how we can help. Our law firm provides free initial consultations in which we can answer all your questions and talk through your options.

Regardless of the charges against you, the state must prove each element of the crime(s) it alleges to win a conviction. Our seasoned Raleigh drug crime defense attorneys will thoroughly examine and challenge the state’s evidence and theory of the case.

In some cases, drug charges are dropped or dismissed due to improper arrest, such as a lack of probable cause to stop you or your vehicle, illegal search and seizure, or failure to advise of Miranda rights after you were detained.

If a case goes forward, a few of the facts we may dispute include:

As your attorneys, we will likely have several opportunities to fight for drug charges against you to be reduced or dropped. When appropriate, we will discuss with you whether accepting a plea deal or going to trial would be in your best interest. Regardless of the circumstances of your case, our Raleigh drug crime defense lawyers will fight aggressively for the most favorable outcome possible for you.

You have the right to be presumed innocent of any drug crime unless the state can prove its charges. Our legal team can thoroughly investigate and challenge the charges you face and the evidence against you. If the state has a strong case, we will work hard to either prevent a drug crime conviction or, if need be, prevent the more serious consequences of jail or prison time.

Being arrested on drug charges is for most an intimidating, if not terrifying, situation. It requires prompt and qualified legal assistance from a knowledgeable criminal defense attorney. Our team can thoroughly explain the charges you face and the potential consequences in a free initial consultation with you. We can also advise you of a potential defense against the charges you face. Contact us today.

Schedules of Drugs in North Carolina

“Controlled substance” is the legal term for numerous illicit drugs, which North Carolina categorizes in a system of schedules according to their danger and/or addictive qualities and potential for abuse:

It is also illegal to possess an “immediate precursor chemical” used to manufacture drugs, such as methamphetamine (“meth”).

Generally, North Carolina law provides for the following charges and punishment for the possession or distribution (sale) of controlled substances:

Misdemeanor Possession of Drug Paraphernalia
This can be anything used to grow, make, use, test, sell, or transport illegal drugs. Typically, it refers to smoking pipes (“bowls,” “bongs,” hookahs), scales, syringes, large quantities of baggies or pill bottles, grow lights, etc. It is a Class 1 misdemeanor punishable by up to 120 days in jail.

Misdemeanor Possession of Schedule V Drugs
This is a Class 2 misdemeanor punishable by up to 60 days in jail.

Misdemeanor Possession of Schedule II, Schedule III, or Schedule IV Drugs
This is a Class 1 misdemeanor punishable by up to 120 days in jail.

Felony Possession of Marijuana
Possession of 1.5 ounces or more of marijuana is a Class I felony punishable by up to 24 months in prison.

Possession of a Schedule I Drug
This is a Class I felony punishable by up to 24 months in prison.

Sale of Schedule I or Schedule II Drugs.
This is a Class G felony punishable by a maximum sentence of 47 months imprisonment.

Sale of Schedule III, Schedule IV, Schedule V, or Schedule VI Drugs
This is a Class H felony punishable by up to 39 months in prison.

Possession with Intent to Sell and Deliver (PWISD) Schedule III through Schedule VI drugs.
This is a Class I felony punishable by up to 24 months in prison.

Possession with Intent to Sell and Deliver (PWISD) or Sale of a Counterfeit Drug.
This is a Class I felony punishable by up to 24 months in prison.

Drug trafficking may be charged for large-scale possession, transportation, manufacture, or sale of a controlled substance. This offense is punished more harshly than drug possession. Of course, higher amounts of drugs result in longer sentences. Longer sentences are also imposed based upon the seriousness of the drug involved. Potential sentences include:

An attorney will be able to inform you of the charges you are facing and the potential sentence involved if convicted.

After an arrest on charges of drug crimes in North Carolina, what happens next can have a serious impact on your future. You should face drug charges of any kind with the assistance of a knowledgeable and understanding criminal defense lawyer who can walk you through what to expect and fight fiercely for you.

The experienced legal team at Kurtz & Blum can answer any questions you have about building a strong defense against drug charges. Schedule a free, no-obligation initial consultation today. Call (919) 832-7700 for an honest assessment of your case or contact us through our online form.

“I didn’t have to worry about a thing. they took care of the whole situation and sent me an email after the matter was taken care of.”