Home Blog Carfentanil is Linked to Rise in Overdoses

New Deadly Drug is Linked to Rise in Overdoses 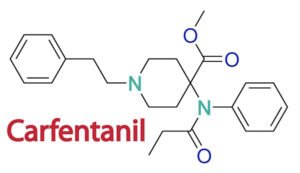 Earlier this year, the global battle against illegal substances took yet another unexpected turn. An alarming and unprecedented surge in overdoses resulted in a full-scale investigation ultimately leading agents to a synthetic opioid developed roughly 40 years ago as a tranquilizer for large animals, like elephants. Known as carfentanil, this particular drug is a derivative of fentanyl, the prescription painkiller recently making headlines in connection to the death of famed pop star, Prince.

To put matters into perspective, carfentanil is described as 100 times more powerful than fentanyl and 10,000 times more potent than morphine; not to mention, officials have deemed the drug 50 times more lethal than heroin. Ohio seems to be one of the states hardest hit by the recent influx with drug overdoses skyrocketing to upwards of 50 per day according to a statement from Newtown, Ohio Police Chief and Director of the Hamilton County Heroin Coalition Task Force, Tom Synan in a September news release.

The Danger is Spreading

In August, the National Institute on Drug Abuse advised officials in Ohio as well as Florida to be on the lookout for this spreading danger. Exactly one month later, the DEA took this warning to the nationwide level. This response is largely spurred by widespread access to the drug courtesy of the internet and the potential anonymity of the online world. As the issue stands, virtually anyone can order carfentanil from large-scale producers in China where the drug is manufactured for use in the veterinary industry, meaning Raleigh drug lawyers are likely to see an uptick in related cases in the near future.

Perhaps the more imminent threat lies in other realms of the drug market. Those purchasing carfentanil from China or Mexico have begun to take advantage of its relative affordability, using it to dilute heroin or as a substitute for other popular products, such as oxycodone. While individuals seeking out either heroin or prescription painkillers are aware of the rising prominence of counterfeits, they typically have no way of knowing when and where such a deadly substance may turn up due to the fact that there are no visual identifiers that would alert them to the potential added risk.

At present, getting carfentanil from legitimate labs in China into the hands of those who intend to distribute it under false pretenses is as simple as creating a fake online account and having the product shipped via the U.S. Postal Service. Based on this research of carfentanil, lawmakers are pushing for more stringent tracking regulations in an effort to mitigate the amount making its way into America. While this may put a dent in the growing overdose statistics, further efforts will be needed to hamper traditional trafficking.

The Impact on North Carolina

Carfentanil’s rise on the black market took place so suddenly, legislature has yet to be passed regarding this specific form of opioid. That being said, it is only the latest concern among a list of more than 30 spin-offs of fentanyl, which is already recognized by the legal system. North Carolina law includes certain catch-all provisions allowing those caught trafficking carfentanil to be prosecuted in line with related substances.

Carfentanil is a deadly substance for those unfortunate enough to stumble across its path, but its effects are not limited to consumption. Studies show even direct dermal contact with the drug places people at risk of overdose and this could pose a terrible consequence for those in contact with minors. In short, a person inadvertently purchasing carfentanil being represented as oxycodone or heroin could face far more serious charges than those pertaining to the less harmful of the two controlled substances.

Raleigh criminal lawyers Seth Blum and Howard Kurtz point out should the drug be passed along to another individual who happens to overdose as a result of mere contact, charges could jump from misdemeanor possession to outright manslaughter. As carfentanil becomes more mainstream, legislation regarding this substance specifically is expected to be put into play, bringing harsher punishments upon those possessing or distributing it whether or not they are aware of the circumstances.

While prosecutors are working to steel their stances in regard to this drug, defense attorneys are developing stronger arguments for those on the receiving end of related charges.