Charged With Driving While Intoxicated? Here's How a Raleigh DWI Lawyer Can Help 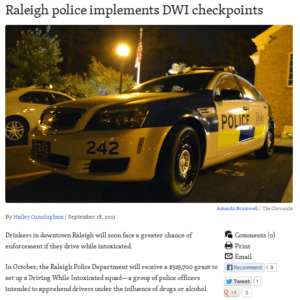 In Raleigh, local authorities are setting up the Driving While Intoxicated (DWI) Squad, a group of troopers who are dedicated to apprehending drivers under the influence of drugs and alcohol. The Chronicle reports on September 18, 2013:

In October, the Raleigh Police Department will receive a $525,700 grant to set up a Driving While Intoxicated squad—a group of police officers intended to apprehend drivers under the influence of drugs or alcohol…

The squad was created to curb driving after drinking, Lt. Tomczak of RPD said. Tomczak helped to develop a federal grant proposal that brought in the necessary funds and said that the squad will further decrease the number of wrecks caused by impaired drivers.

Before the DWI Squad starts their operation, Raleigh drivers should be aware of the North Carolina drunk driving law to avoid the expense and inconvenience of DWI charges, such as revoked license, DWI classes, attorney fees, community service, and even the possibility of jail time.

When charged with DWI, however, the most important thing to do is to seek the help of legal experts. An experienced Raleigh DWI lawyer can help clients secure a pre-trial limited driving privilege, which allows them to drive even without a license for certain purposes at certain times if their license has been taken due to being charged with DWI.

An attorney can suggest a certified agency administer the Substance Abuse Assessment, which helps the client learn how to avoid DWI trouble again. Such assessments can also be useful during sentencing to help persuade a judge to offer a lesser sentence.

If the attorney is especially versed in drunk driving cases, he can also request a Department of Motor Vehicles hearing on whether or not his client has refused to take a breathalyzer test. This hearing, which could take several weeks, delays the judgment that leads to revocation of the clients’ driver’s license until the hearing. The lawyer can also represent their clients at a DMV restoration hearing, which requests the court remove the judgment so the Department will restore a “permanently suspended” license, which can help someone whose life has been on pause due to a DWI conviction to get back on track.

These are just a portion of the legal assistance that DWI lawyers provide. By utilizing the skills and experience of the DWI lawyers at Kurtz & Blum, PLLC, people in Raleigh charged with driving while impaired can breathe a little easier knowing that they have qualified representation at their side.