Child Custody for Lesbian and Gay Couples Getting Divorced 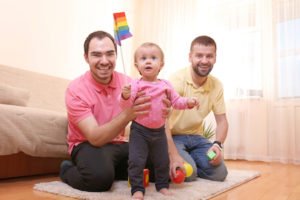 As you are probably already aware, same-sex couples have had the right to marry in North Carolina since 2015, but if you are in a same-sex marriage and are considering divorce, you are still likely to encounter issues when it comes to child custody disputes in court.

Although same-sex marriage is now legal, the law is still largely geared towards heterosexual couples and same-sex parents may find the law more difficult to navigate, as there are several scenarios that generally do not come up in heterosexual custody matters.

How To Be Considered A Legal Parent

As an experienced family attorney, I am often asked, “what makes me a ‘legal parent’? or “what if I have already adopted the child?” or “what if both only my partner is a biological parent?”

In North Carolina, the biological mother is the only individual that has automatic legal parental rights over a child.

In heterosexual relationships a mother and a father are generally on the birth certificate or the father will sign an affidavit of parentage for children born out of wedlock.

For same-sex couples in North Carolina, both partners may be legal parents where one spouse is the biological mother and the other spouse adopts the child, or when both spouses jointly adopt the child.

If you are not a legal parent, you must first establish standing, or the right to seek custody.

What If I Am Not A Legal Parent? How Can I Seek Custody?

The real issue in same-sex marriages and child custody arises where only one partner is the child’s legal parent. This is very common especially in lesbian marriages, as one mother chooses to carry the child, making her a legal parent automatically.

If you are unable to work out an agreement with your ex, you may have to seek a judicial order for custody.  A court can order custody to a third party or non-legal parent where it is shown that the legal or biological parent either

More simply put, a judge will consider factors that speak both to the intent of the biological parent and the nature of the relationship to the child both before and after the child’s birth. As to intent, a court will look to the parties’ planning prior to the birth, including how the parties held themselves out to their peers, how jointly decisions were made, how expenses were paid, and who was actually present at the birth.

In 2008, the North Carolina Court of Appeals weighed several factors in considering whether a mother acted inconsistently with her constitutionally protected parental rights. Those factors included the following:

Any actions that would suggest that the legal-parent has allowed a parent-child relationship to exist will help establish a right to custody for the non-legal parent. Most commonly this would involve the parties holding themselves out to family and friends as having such a co-parenting relationship, including living together for an extended period of time.

Because of the potential issues involving child custody and same-sex couples, you should always try to come to an agreement with the other side in order to avoid the uncertainties of court.

As with any custody dispute, it’s imperative that you seek advice from a knowledgeable child custody attorney in your area, which is where we can help! Kurtz & Blum, PLLC understands that regardless of the type of marriage, dealing with child custody can be a trying time.

Our attorneys have both the skills to help you, but also the compassion and understanding to help you find the solution right for you. Please give us a call today 919-832-7700.