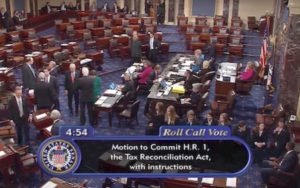 Congress passed a $1.5 trillion tax bill on December 19, 2017, cementing what is considered “the most sweeping rewrite of the tax code” in recent history. The bill impacts the most contentious points of taxation, such as greater tax cuts for corporations and business owners. It also significantly affects individual taxpayers who now face the loss or limitation of several tax breaks.

Under the bill, for example, taxpayers can:

The last two should raise red flags for any family law attorney and their clients.

What does the lost alimony tax break mean?

If most alimony payments are no longer tax deductible this will create an additional financial burden on the spouse required to pay alimony. The payor would now have to balance it with other fixed expenses like child support, and education-related expenses for children.

This, in turn, would complicate calculations for exactly how much of these other fees the payor would be responsible for, and potentially impact how other assets are divided between the divorcing parties.

Divorce – already difficult in itself – would prove be tougher on lower-income individuals, for whom a few hundred dollars in tax breaks could make a big difference for day-to-day living.

How much of a game-changer could it be?

The lost tax break could drastically change how couples negotiate their divorce. In previous years, some supporting spouses agreed to pay the other party’s requested amounts, expecting they would at least receive some tax deductions. With this no longer being possible, negotiations could become more difficult due to parties becoming unwilling to pay or settle.

Since alimony is also a factor in designing pre-nuptial agreements, the new bill can also influence couples’ decisions for themselves and their families – even if they never file for divorce.

The bill’s stipulations on alimony will not take effect after December 31, 2018; parties already paying alimony need not worry outside their current obligations.

Nonetheless, contact your family law attorney if you want to further discuss how the new tax bill might affect you. The team at Kurtz & Blum, PLLC can help you navigate all legalities concerning marriage, no matter what complications arise along the way.