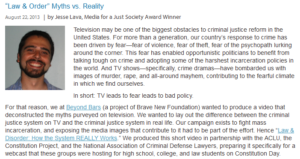 Recently, we found an article containing some criminal justice myths and realities. If you or someone you know has been arrested, a knowledgeable Raleigh criminal lawyer can help expose the myths so people make the best decisions about their case. In the article posted by the National Council on Crime & Delinquency, author Jesse Lava listed five of the most popular myths below:

The first myth is that police primarily focus on violent crime. But Martin Horn, executive director of the Permanent Commission on Sentencing in New York, said that violent crime comprises the smallest percentage of reported incidents. Bonnie Hoffman, a deputy public defender in Loudoun County, Virginia, stated that most offenders are arrested for property crimes and drug-related offenses.

Another myth is that the punishment always fits the crime. Yet Jim Gray, a former judge at Orange County, California, said that judges can sometimes become visibly upset after imposing mandatory sentences that they felt were inappropriate to the crimes. Susan Herman, president of the American Civil Liberties Union, noted that Americans tend to receive longer sentences than those in England, Canada, the Netherlands, and France.

A third myth is that the accused always receive an adequate defense. In reality, Hoffman said, most people don’t have the resources to defend themselves against criminal charges. Even when courts assign a public defender, they don’t always have the resources they need to put on a proper defense. Public defenders can deal with a maximum caseload of 200 misdemeanors or 75 felonies at a time; 58% of these defenders exceed these limits, which stretches them very thin.

Another myth is that the accused often go to trial. However, only 1 in 40 felony cases reach the trial stage. Hoffman stated that defendants who refuse to accept a plea bargain are often charged with the most serious offenses, and often face harsher sentencing than they would if they had accepted a plea. Horn added that a criminal defendant is often confused about the potential consequences of the criminal charges they face.

A final myth, or more like a popular belief, is that justice is truly blind. Former prosecutor John Amabile said that while drugs cross economic and ethnic lines, African Americans are ten times more likely to be arrested and five times more likely to go to prison than white people.

Regardless of the case, a reliable Raleigh criminal attorney can help cut through the myths and get to the truth.