DA Decides Not to Press Charges Against NCSU Football Players 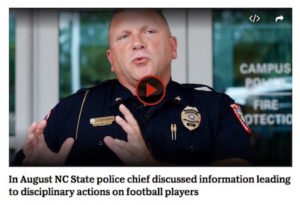 Five football players from North Carolina State University (NCSU) will not be charged with sexual assault, following an investigation into allegations raised against them earlier this year.

“Our office has undertaken a detailed review of the information provided from the investigation by North Carolina State University police,” said Wake County District Attorney (DA) Lorrin Freeman. “The evidence does not support moving forward with a criminal prosecution.”

Three female students had said five young male athletes assaulted them during a party at a campus apartment in July. NCSU Police Chief Jack Moorman then called the case “unusual”, since the assaults reportedly happened separately – while in the same location – in a span of 90 minutes.

A team of detectives devoted some 800 hours piecing together what happened from conflicting statements, security footage, messages between the parties involved, and consultations with toxicology experts. The DA’s decision hinged on meeting the requisites of state law:

“[Conviction] for second-degree rape or sexual battery requires a finding that force was used in the commission of the assault and that the assault was against the will of the victim, or that the victim was mentally incapacitated, mentally disabled or physically helpless at the time of the assault.”

Though spared criminal charges, the five athletes – all freshmen – were nonetheless suspended or dismissed from the football team.

Don’t wait for charges to secure your criminal defense team

The case at NCSU might have been unusual, but was the outcome of the investigation unusual too?

The answer is: not quite. As the NCSU example shows, there’s always a possibility that accusations against individuals will lead nowhere. Grounds may be insufficient, the burden of proof complicated, or parties might even withdraw allegations. However, that does not mean anyone accused of a crime can treat accusations lightly; you don’t need to be called to trial before you call a lawyer.

Should you find yourself under investigation for any crime, you should secure the services of competent criminal attorneys, even before charges can be filed against you. Already having legal representation during preliminary investigations will further protect your rights and interests.

For example, your attorneys can reach out to prosecution and law enforcement agents in Raleigh and advocate on your behalf. If circumstances resemble the NCSU case and the investigation yields insufficient evidence for pressing charges, they could also push the DA for a more thorough investigation to completely clear your name.

Whether as pre-charge counsel or a defense team, the criminal defense attorneys with Kurtz & Blum, PLLC work to get our clients the best results possible.