Home Blog Facing a Gun Crime? Learn How to Defend Your Rights 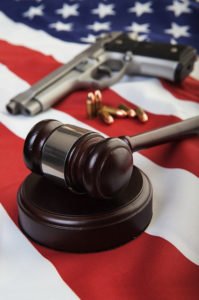 The 2nd Amendment to the U.S. Constitution guarantees the right of the people to keep and bear arms. Yet that right may be subject to many conditions depending on where you live. Each state has the right to enact legislation pertaining to a citizen’s rights to own or carry a gun. North Carolina’s gun laws, for instance, regulate the sale, possession, and use of firearms and ammunition within the entire state.

With so many frightening cases involving gun violence in public places such as schools and cinemas, North Carolina lawmakers have recently modified firearms regulations and intensified the enforcement of these laws. For example, a Wake County Superior Court judge ruled to ban concealed-carry gun permit holders from bringing their handguns to the N.C. State Fair.

Still, many gun control advocates remain unconvinced that government officials are doing enough. Recently, the activist group, Moms Demand Action for Gun Sense in America, called for changes in the State’s gun laws and a stricter background check for those who wish to purchase guns. Another North Carolina group, the North Carolinians Against Gun Violence, held a service at Judea Reform Congregation in Durham in December in memory of all victims of gun violence in the country, and also to commemorate the second anniversary of the Sandy Hook Elementary School shooting.

Gun violence is a delicate issue that hits at the core of an American’s right to bear arms. A conviction for a gun crime in North Carolina carries substantial fines, and possibly even jail time. Such penalties make it crucial for anyone accused with a gun crime to pursue all their legal and constitutional options. If charged with a gun crime, a diligent Raleigh criminal lawyer with Kurtz & Blum, PLLC can help you build a strong defense.

The various laws governing guns can be complex and difficult to understand. When law enforcement questions you about any involvement in a gun crime, you have a constitutional right to remain silent and ask for an attorney. Before you answer questions or provide a statement, be sure to have a capable Raleigh criminal defense attorney by your side who can advise you on how to protect your rights.