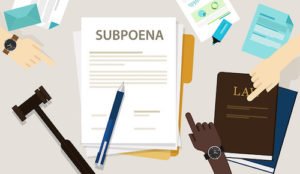 If a witness refuses to talk to a district attorney, the law gives prosecutors a way to compel these witnesses to show up through the issuance of a subpoena. However, before the judge can issue a subpoena, the prosecutors must first present a convincing argument that the witness’s testimony is essential to the administration of justice.

The takeaway here is that a subpoena can’t be issued to a witness without the judge’s approval. However, in New Orleans, the District Attorney’s Office reportedly maintained a practice of issuing ‘fake subpoenas’ to get witnesses to come forth.

The story behind the fake subpoenas

A recent report by The Lens, a New Orleans nonprofit news service, claimed that the DA’s office had been issuing notices to witnesses labeled ‘subpoena,’ which contained language that explicitly threatened witnesses with possible arrest in an effort to pressure them to cooperate.

Orleans and Jefferson Parish DAs were informed that they were skirting the law with their unauthorized practice, and that they did not have the authority to issue so called “subpoenas” independently. Furthermore, their offices didn’t have the power to enforce the threats contained in the unofficial documents.

When confronted about the fake subpoenas, Orleans Parish assistant DA and spokesman Christopher Bowman explained that the so-called ‘subpoenas’ were only used as a last resort when other requests to appear failed. Bowman said that their office will stop issuing the invalid ‘subpoenas,’ and will replace them with notices labeled ‘notices to appear” believing that no one should have a complaint about the new language in the revised notices.

Bowman adds that the DA’s office is looking at “the bigger picture” and are doing everything in their power to convict as many responsible individuals as we possible amid an escalating violent crime problem that includes murders, rapes and armed robberies. He promises that they are not going to let the issue about the invalid subpoenas “bog down the process.”

When an institution begins to believe that it is superior to the laws it seeks to uphold, it may start to justify unethical if not illegal actions. If you receive any document from the DA’s office, contact a criminal defense attorney immediately.

The need for a criminal defense lawyer

When faced with serious penalties or jail time, you need to retain a criminal defense attorney to represent you. The good news is that with a proper defense attorney, miscarriages of justice like the one described above can be avoided.