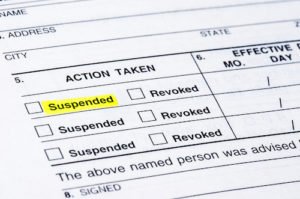 A New Hanover county employee made the news in recent weeks after being charged with driving while impaired (DWI). In this case, it was not his DWI charge that was newsworthy, but other incidents following his arrest.

According to WECT 6, the county employee “misrepresented facts” about his arrest to his employers and “failed to disclose details about the blood test performed after he refused a breathalyzer.” These actions that ultimately resulted in his termination.

The employee was initially granted a Limited Driving Privilege (LDP) which permitted him to drive after his license was revoked. However, WECT revealed that North Hanover’s county safety policy prohibited this:

“Effective August 1, 2006, employees who have had their drivers’ licenses suspended or revoked for any reason will not be allowed to operate a County vehicle or a privately owned vehicle on County business. This restriction shall include all employees issued a Limited Driving Privilege by the state.”

It is regrettable that the employee chose not to be upfront about the DWI charge against him. It is also unfortunate that New Hanover County does not allow employees who have had their driver’s license revoked to drive a county vehicle when they have been granted a LDP.

However, the incident offers lessons for individuals in nearby Raleigh and elsewhere in the state who have been charged with DWI.

What is a Limited Driving Privilege?

A DWI is a serious charge and losing your license can become a major problem. While state and county employees may have additional limitations placed upon them, the LDP provision offers a way for most people to overcome this issue.

In North Carolina, an LDP authorizes a person whose license has been revoked to drive, under certain conditions, if driving is essential to complete responsibilities related to work, household, school, religious worship, medical care, or court-ordered treatment and community service.

Conditions may stipulate that a person only drive within a specific timeframe, such as standard working hours (6:00AM to 8:00PM on weekdays), or that a person could only operate a specific vehicle.

How does one become eligible for a LDP?

Courts and the Department of Motor Vehicles typically issue LDPs at their discretion, based on eligibility criteria relative to the specifics of a person’s offense, driving history, and other factors. The privilege can be granted pre-trial or post-trial – which is why it’s important to contact an experienced DWI lawyer who will explain your options leading up to your hearing.

A DWI lawyer with Kurtz & Blum, PLLC can help you if you are charged with a DWI offense in or around Raleigh. Be honest with your attorney and trust that they will do everything in their power to uphold your rights, including the right to drive. Aside from helping determine your eligibility for LDP, a knowledgeable lawyer can help you minimize the penalties.