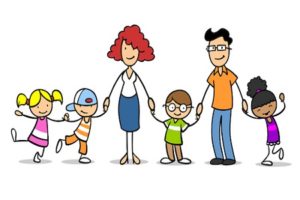 In California, a 32-year-old woman woke up one day to find that she had become the mother of five little girls. No, they did not appear out of nowhere, and no, it did not necessarily happen overnight. The case of Lacey Dunkin is an admirable one because she took a chance by accepting the responsibility for taking care of these children that truly needed the love and devotion of a new mother.

It started out as a desire to have children of her own without requiring the benefit of marriage. Upon the suggestion of her own mother, she looked into the option of foster care, and became certified in 2011. It wasn’t a matter of simply volunteering for the job, though. There was training and a home study course that she had to pass before she could become certified for foster care.

Being a single woman, however, she worried that she might not be given the opportunity. As it turns out, however, she didn’t have to worry for too much. Just a few months after she received her certification, she received an emergency call in the middle of the night.

She quickly found herself caring for four siblings comprising of a 5-year-old, twins at 2 years old, and a one-year-old—all beautiful little girls looking for a home they could feel safe in and loved. A while later, an infant, which turned out to be the youngest from the biological mother, was sent to her as well.

Moving On to Adoption

Considering how seriously ill-equipped the biological mother was to take care of all five children, it was certainly a very fortunate turn of events for the children that they ended up with someone like Lacey, who was more than willing to take them all in under her wing. Now all she needed was to make them hers officially.

Lacey’s case, while inspiring, is actually far from being unique. There are many instances wherein foster parents end up becoming permanent parents of the children through foster care adoption.

This is a great way opportunity not just for the adoptive parent to have the family they’ve always dreamed of, but also, and more importantly, for the children who will be given the chance to have a truly caring and loving home.

While adopting a foster care child comes with a number of hoops to jump through, it a very viable alternative and often less expensive option to private adoption.

According to Lacey, “I want people to know that foster children are not bad, they’re not broken,” says Dunkin. “Children are resilient, and want and need a loving home.”

Because of the legalities involved, it would be to your best interest to seek the help of a family attorney who can guide you through the process of foster care adoption. Make the most out of it by getting professional legal help, such as those offered by Kurtz & Blum, PLLC.