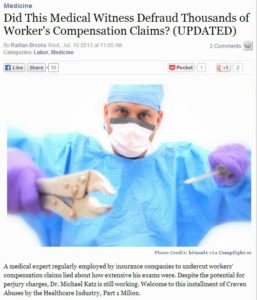 The time had come for a popular New York orthopedist to suffer the consequences of his actions after an NYC judge discovered he had lied under oath. Queens Supreme Court Justice Duane Hart didn’t waste any time meting out due punishment to Dr. Michael Katz for lying about a medical-legal exam he had conducted. The Village Voice provides more information on this development:

The story starts back in April at a Queens Supreme Court hearing assessing whether laborer Manuel Bermejo workers’ comp claim from a fall was denied due to malpractice at the hands of a New York City medical resident. The case names Amsterdam & 76th Associates, LLC, Ibex Construction, LLC and Marble Techniques, Inc., as defendants.

The defense hired Dr. Katz to refute the claim. In his expert testimony Katz claimed that his examination lasted for 20 minutes. Little did the insurance company know, the plaintiff’s lawyer had a secret recording of the exam, showing that it lasted exactly one minute and 56 seconds. According to the court transcript, Bermejo’s lawyer secretly recorded the exam–Bermejo’s second–because he believed Katz lied about the length of the first exam, which Katz said lasted a whopping 45 minutes. The admission of the recording forced presiding Judge Duane Hart to declare a mistrial.

Insurance companies and defense lawyers involved in a personal injury case will almost always demand that the plaintiff be examined by a doctor of their choosing. This process is called an independent medical exam (IME); the reality, however, is that doctors who perform IMEs often testify on behalf of the defense, and their testimonies often contradict the plaintiff’s claims as to the extent of the injury.

To counter this, a professional Raleigh personal injury lawyer will often ask an IME doctor how much money she makes, or how often she testifies for the defense. The lawyer asks this question to show bias. If the doctor on the stand tries to dodge such questions, the lawyer can then take steps to get the answer he needs.

If ever you become involved in a personal injury case and the defense asks you to submit to an IME, talk to an experienced Raleigh personal injury attorney at Kurtz & Blum, PLLC prior to the medical exam. Our lawyers will likely have specific information or advice for you about the doctor you will be seeing.

Simply give us a call today at 919-832-7700 to schedule your one-on-one personal consultation.

(Article Excerpt and Image from “Did This Medical Witness Defraud Thousands of Worker’s Compensation Claims?” The Village Voice, (UPDATED), July 10, 2013)