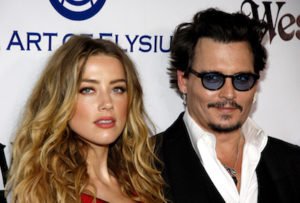 There’s no doubt that divorces can get messy, but it can get even messier when allegations of domestic violence surface. This is exactly what’s happening in the well-publicized divorce of Hollywood star Johnny Depp and actress Amber Heard, with the latter claiming “years of physical and psychological abuse” while living with her estranged husband.

At this point, it is yet to be proven whether Depp is guilty of the allegations or not. It is not uncommon for such allegations to surface despite any evidence of actual proof. Amid all the speculations and stories, friends, family, and celebrities continue to support each star.

On May 23, Amber Heard filed a divorce due to irreconcilable differences. Heard was also granted a temporary restraining order from her husband of 15 months, claiming that the actor had physically abused her throughout their four-year relationship.

One particular incident, which occurred on May 21, alleged that Depp threw a cellphone at her, which hit her in her cheek and right eye. Heard further claimed that her husband was drunk and high while he allegedly pulled her hair and violently assaulted her.

Depp is yet to provide a statement against these allegations, though Depp’s attorney, Laura Wasser, claims that Heard is merely “attempting to secure a premature financial resolution by alleging abuse”.

Supporters of Each Celebrity

Since the allegations of domestic violence surfaced, people immediately showed their support for both Depp and Heard. Depp’s daughter, Lily-Rose Depp, took to Instagram to show her support for her father, saying that he was the “sweetest, most loving person I know.” Vanessa Paradise, Laurie Holden, and Paul Bettany also expressed their support for Depp.

Meanwhile, Heard’s friends iO Wright and Raquel Rose Pennington were purportedly involved in the May 21 altercation. Both Wright and Pennington allegedly came to Heard’s defense, and were allegedly verbally accosted by Depp.

Samantha Spector, Heard’s divorce lawyer, further alleged that this was not the first incident of abuse against Heard, claiming that there have been two separate incidents in the past few months.

Though the divorce and accusations of domestic violence are two different types of cases, both often go hand in hand, according to this family attorney. Domestic violence claims are often used in divorce disputes, sometimes to the accuser’s advantage. Yet, even though domestic violence is a serious allegation, it’s often hard to tell whether the claims are true or not.

Thus, it’s always best to give both parties the benefit of the doubt until both sides of the story are heard. Until then, if you find yourself in a similar situation, you can seek help from a Raleigh divorce attorney with Kurtz & Blum, PLLC, who will examine the circumstances and provide a solid defense.