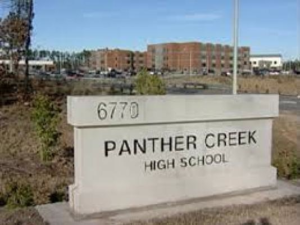 Last October, Kenneth Tyler Halker, a 17-year old student in Panther Creek High School in North Carolina was arrested for threatening fellow students. According to a report from WRAL, police brought in Halker after stating he would bring a gun to school. Later, reports claimed that Halker also took to social media indicating that he had a hit list and planned to return to school with a gun “fill bodies with bullets.” He also allegedly sent a text message to a classmate that said “you’re number five on my list”.

During their investigation, police also found a Snapchat photo depicting two AR-15 assault rifles surrounded by piles of ammunition. A ballistic vest with multiple knives attached could also be seen on the image.

In North Carolina, someone who willfully threatens to physically injure a person can be charged with communicating threats, a Class 1 misdemeanor. By law, this type of threat could be communicated to the person, orally, in writing or by any other means. The threatened person should also have a reasonable suspicion to believe that the threat will be carried out. With the evidence police found, it’s understandable that the district attorney would agree that the grounds for the arrest were sound.

Reports claim that Halker also allegedly assaulted a female student in the cafeteria for which he was duly suspended from school. He was later charged with simple assault, a Class 2 misdemeanor. A victim in this case could have suffered minor injury that would not necessarily require a medical attention.

In North Carolina, conviction for simple assault is potentially punishable by probation and a sentence of one to 30 days in jail. If a defendant has had previous run-ins with the law, such as a drug-related offense, the sentence can be as long as 60 days in jail along with a $1,000 fine. If that were the case, the defendant would benefit from the assistance of a Raleigh criminal lawyer who is familiar with laws regarding assault and battery.

The good news for Kenneth Tyler Halker is that his actions did not result in any harm to his fellow students. Had the situation escalated, the consequences would be more severe. Anyone charged with a misdemeanor should seek legal representation from a trusted criminal lawyer who understands how the legal process works in North Carolina.