Driving with 0.08 percent of alcohol in your blood (often referred to as blood-alcohol content or BAC) is enough for you to be subjected to arrest and prosecution for driving while intoxicated or DWI. Getting a 0.08 BAC reading is dependent on several factors, including weight, gender, and type of alcoholic beverage consumed. For illustration, CNN’s Mike M. Ahlers says that a typical 180-pound male will reach that threshold “after four drinks over the hour.”

Law enforcement officers automatically cite motorists caught with a BAC of 0.08 with a DWI. If you’ve been charged with DWI, then it’s time to call a Raleigh DWI lawyer to help you with the impending legal case.

The National Transportation Safety Board’s (NTSB) May 14, 2013 recommendation to lower the legal BAC level that constitutes drunk driving from 0.08 to 0.05 percent has caused some quarters to voice concern over such a drastic reduction. If the new recommendation is enacted, the same 180-pound male in the previous example would reach the illegal 0.05 BAC with just two to three drinks. The likelihood that a woman would reach the same percentage with a single drink is the very reason The American Beverage Institute (ABI) was disappointed with the recommendation. This new restriction could, in effect, totally prohibit a woman from driving after a single drink.

The issue raised against this new NTSB restriction is that it disregards the fact that like in many cultures, drinking is a social practice among many Americans. The NTSB’s basis for the 0.05 figure is an outdated piece of data that even its source, the National Highway Traffic Safety Administration, is no longer using. Joe McClain and his colleagues in the Beer Institute believe that policymakers are better off directing their efforts on what’s proven to be working well in lessening DWI-related fatalities such as “focusing on repeat offenders and increasing penalties on people with higher BAC.”

Critics argue that putting a cap on how much alcohol can be consumed is not likely to lower the annual rate of more than 10,000 DWI-related casualties. Lowering the legal limit is only going to unjustly penalize responsible citizens who are truly capable of driving safely after having a socially acceptable amount of alcohol, it is believed. Sarah Longwell, managing director of ABI adds, “Further restricting the moderate consumption of alcohol by responsible adults prior to driving does nothing to stop hardcore drunk drivers from getting behind the wheel.”

While it’s ultimately up to each state whether or not to consider the NTSB recommendation, Seth Blum, a Raleigh DWI attorney with Kurtz & Blum, PLLC, advises motorists to always exercise caution when dealing with police officers who have pulled them over on suspicion of DWI. They should keep in mind that they have a right to refuse field sobriety tests and inspections and have the right to remain silent. 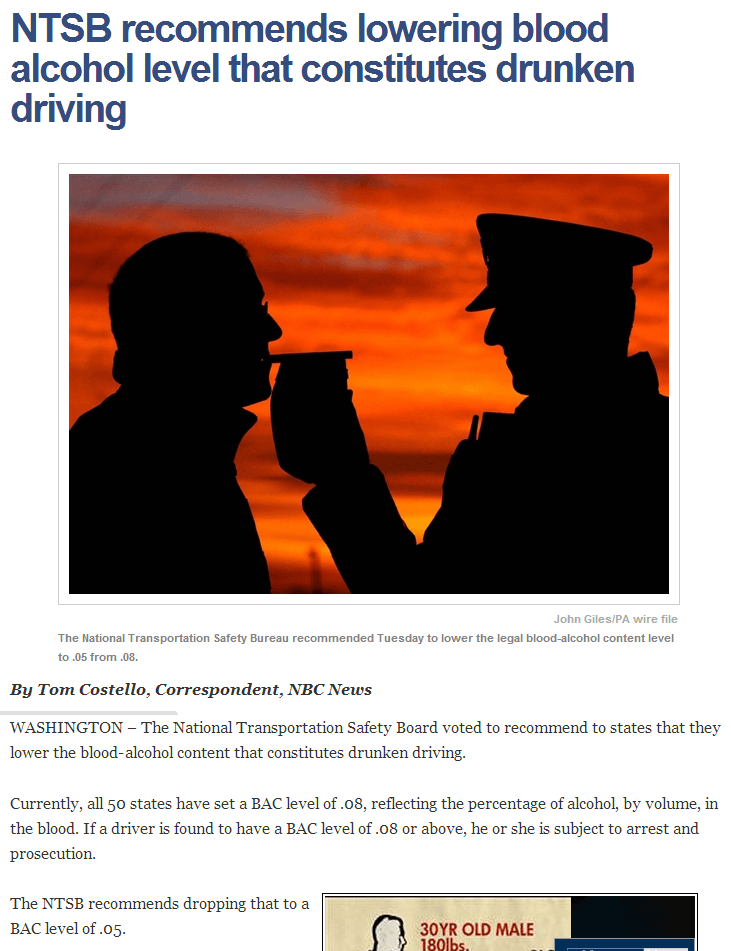