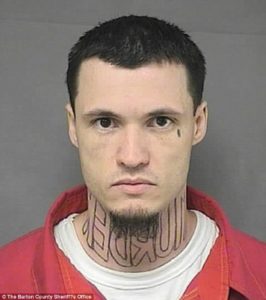 Part of the Miranda warning goes: “Anything you say or do may be used against you in a court of law.” For one Kansas convict, however, the clause missed the word “have.”

Howard Kurtz, a skilled Raleigh lawyer with Kurtz & Blum, PLLC discusses a recent case of a man on trial for murder who coincidentally has the word “MURDER” tattooed around his neck.

Jeffrey Wade Chapman, charged with the murder of Damon Galliart in November 2011, asked the court for permission to have a tattoo artist remove the tattoo across his neck (shown in the mugshot). Chapman feared that the infamous tattoo may weigh heavily against him when he appears in court. Although county police pointed out that the law permits tattoo artists to practice only in licensed facilities and not in jail, prosecutors did not object to hiding the tattoo underneath clothing or bandage.

The tattoo’s wording, however, leads one to ask: Could it, in fact, have anything to do with his criminal case?  Chapman’s attorney had this to say:

“Mr. Chapman’s tattoos are not relevant to any material facts and Mr. Chapman asks for the court to exclude any mention of his tattoos at trial and further to be allowed to cover them up in an appropriate manner. The fact that he has ‘Murder’ tattooed across his neck is irrelevant to the State’s case and extremely prejudicial to Mr. Chapman if introduced at trial or observed by the jury.”

Everyone is presumed innocent until proven guilty, the accused enjoys the right to a competent, unbiased hearing. Unless there is specific evidence that relates the tattoo to the murder, its appearance in court could prejudice a jury giving the defendant a possible claim for appeal that he did not receive a fair trial.

Ratified by the United Nations on March 23, 1976, the International Covenant on Civil and Political Rights (ICCPR) preserves the “inherent dignity of the human person,” which includes civil and political freedom.

Article 14 recognizes every human being’s right to equality in the courtroom. In fact, the phrase “innocent until proven guilty” came from Article 14, Section 2. Our image of Lady Justice who is blindfolded and holding a pair of balancing scales signifies that justice must be served solely based on the facts of the case, not appearances.

Should evidence of Chapman’s tattoo be revealed to the jury in the courtroom, his attorney could claim that this is a violation of the defendant’s Sixth Amendment right to a trial by an impartial jury.

Clients accused of any crime can count on reputable Raleigh law firms like Kurtz & Blum, PLLC for competent legal counsel. For more information about a defendant’s rights or to schedule a private consultation, please call 919-832-7700.