The 2013 North Carolina State Fair ended on October 27 with a staggering 927,563 visitors. The organizers, however, just wished that five injuries didn’t have to be added to the statistics.

During the 11-day fair, things took a turn for the worse when several people dropped 20 feet from a ride called the Vortex (not to be confused with the recent Polar Vortex much of the nation rode out in the past few weeks). These people were about to leave their seats and so weren’t secured anymore when suddenly, the ride started spinning again, impacting the metal floor with injury-inducing force. Five people were hurt in the process, with three of them remaining in the hospital for serious injuries a month after the fair. 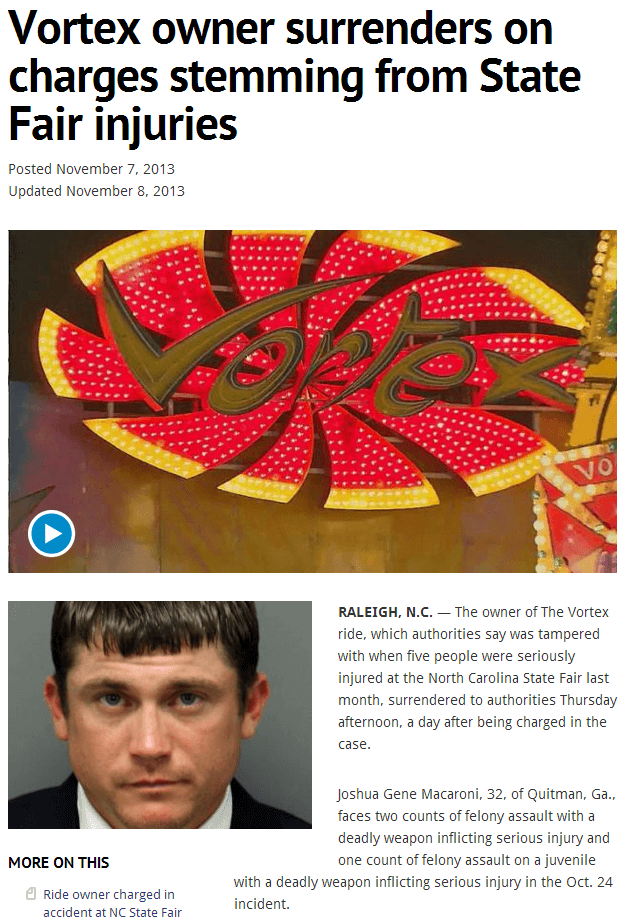 “Known for its wild twirls and flips, The Vortex had stopped and people were getting off when it started moving again, dropping some unsecured passengers 20 feet or so onto a metal floor.

As a result, many people have begun to question the safety of the rides in the fair. Although the ride’s owner has been charged with three counts of felony assault with a deadly weapon, a qualified Raleigh personal injury lawyer believes those are just the beginning of the problems facing the owner.

Assault with a Deadly Weapon

It may be unusual to consider the Vortex as a deadly weapon to file this kind of felony. However, legal experts say many things can be a deadly weapon.

State law considers guns, knives and even a person’s fists to be a deadly weapon. However, any medium that can be used to seriously injure people, like the Vortex ride, can also be considered as a deadly weapon. In North Carolina, assault with a deadly weapon is classified as a Class E or C felony depending on the intention of the offender.

Investigations showed that the Vortex’s safety mechanism had been tampered with. Normally, the ride won’t move until all restraint bars were locked in place. However, the operators argued that the decision to tamper with the safety mechanism had no ill intentions. They deliberately messed with it to make loading and unloading passengers faster.

Close to a million people visit the State Fair every year. More lives could have been put in danger.

The issue of a personal injury claim is a separate matter. Individuals who have been injured as a result of negligence or faulty equipment may be able to pursue restitution for their injuries with the help of a competent Raleigh personal injury attorney.

Victims of the Vortex incident have three years from the date of the incident to file their personal injury complaints, as per North Carolina state law. Due to the complexity of personal injury cases in general, victims should seek the help of a trustworthy law firm in Raleigh. They can guide victims to the right process of filing claims.