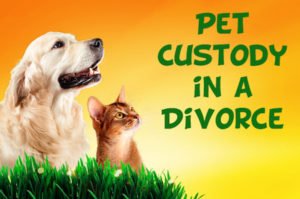 When you think about sharing custody after a divorce, generally child custody comes to mind first. However, for many couples, pets are members of the family and there are many considerations when determining who gets to keep the dog, cat or other household pet, or who is going to pay for the pet’s expenses. In fact, in several states around the country “pet custody” is being argued more and more.

As an experienced family attorney in Raleigh, I’d like to break down some of the basics related to pets in divorce and point out a few things you may want to consider before entering into any sort of divorce agreement or having a judge decide for you.

While my own dogs are treated as my children, unfortunately the law does not see it that way.

In North Carolina your pets are considered property. In other words, they are no different than a couch, a timeshare, or your favorite baseball card (pets can also be considered a “business asset” if you and/or your spouse breed dogs). What this means for your divorce is that technically pets are a piece of property to be divided in equitable distribution (the division of marital assets and debts).

Courts will look at the value of your pet to determine its value and who your pet should be given to. If you have a purebred dog it will likely be considered more valuable than a dog adopted at a shelter or that was given as a gift (as heartbreaking as that may sound), and the court may consider this when dividing other assets.

Specifically, N.C.G.S. 50-B3 grants our courts authority to give possession of your pet by either party or to a minor child residing in the household, as part of the restraining order (if one is granted).

Does it Matter When we purchased or Acquired Our Pet?

In North Carolina, only property purchased during the marriage is considered marital property. Therefore, if you purchased your pet prior to the marriage, the pet is likely going to be considered separate property and your spouse would not have a right to challenge custody of your pet.

If you purchased the pet during the marriage, it would be considered martial property (absent any valid agreement to the contrary).

Is it Possible to Have a Pet Custody Agreement?

Yes! Most couples find this to be the best solution for their family and chose to enter into a separation agreement, rather than let a judge decide what can happen. Several couples have custody agreements related to their pets that include a visitation schedule, what vet your pet is going to see, medical and other expenses for the pet, and emergency planning for their pets.

This can be incorporated into a separation agreement and we always recommend a formal agreement for the times when you and your ex may not be getting along. Sometimes, when a couple has both children and pets, the pets follow the children. Often this can be comforting to the children and provide some stability in their newly adapted lifestyle.

What if we can’t agree?

If you cannot agree on who is responsible for the pet or who gets custody of the pet, you will have to have a judge make the decision for you.

Remember that you always take a risk of the unknown when leaving your personal matters to the discretion of a judge. If this is the route you must take, try to gather documents showing that who purchased the pet, who the pet is registered to, any evidence of companionship with your pet, and any other documentation that you believe would show the pet should be ordered to be in your custody.

Understand that with a division of assets, this may affect what other assets you are awarded in the divorce and ultimately the judge will make the final decision.

At Kurtz & Blum, PLLC, we understand that pets are more than just property and are an integral part of many families.  We can help you address and work through your concerns regarding pet custody, financial support for your pet, and coming to an agreement with your ex that is in the best interest of your pet.