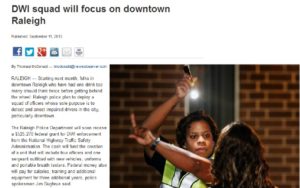 Whether you’re attending a colleague’s send-off party or a friend’s engagement party in Raleigh, alcohol is often included on the menu. It’s always a good idea to designate a driver before the party starts to ensure that everyone gets home safely. At least, that’s a really good plan.

But what happens when the designated driver decides that it would probably be okay to just have one or two drinks. There’s no harm in that, right? Hey, it’s a party after all.

Raleigh law enforcement has stepped up its game and become more aggressive in spotting impaired drivers, according to an article in the News & Observer. Thomasi McDonald writes:

RALEIGH — Starting next month, folks in downtown Raleigh who have had one drink too many should think twice before getting behind the wheel: Raleigh police plan to deploy a squad of officers whose sole purpose is to detect and arrest impaired drivers in the city, particularly downtown.

The Raleigh Police Department will soon receive a $525,270 federal grant for DWI enforcement from the National Highway Traffic Safety Administration. The cash will fund the creation of a unit that will include four officers and one sergeant outfitted with new vehicles, uniforms and portable breath testers. Federal money also will pay for salaries, training and additional equipment for three additional years, police spokesman Jim Sughrue said.

The new squad will focus on the growing nightspots in downtown Raleigh. The increased vigilance is justified, considering the numerous incidents of DWI-related accidents. In fact, penalties associated with a DWI conviction in North Carolina are stiff. First-time offenders will have their driver’s license suspended for at least a year if convicted, receive a substantial fine and could spend time in jail depending on aggravating factors.

So, should you be worried? Will the members of the DWI task force simply pull you over for the heck of it? Generally not, as these officers are trained to spot possible DWI offenders. You’re likely to be stopped only if you exhibit noticeably unusual driving behavior, or you have committed a motor vehicle violation of some kind.  Still, you should be wary of this increased presence and only drive if you have not been drinking.

Should you be arrested for DWI, however, you can build a strong DWI defense case with the help of a qualified Raleigh DWI lawyer. Even if you have registered a blood alcohol concentration (BAC) exceeding 0.08 percent, there are options. It’s very important to seek advice from a Raleigh attorney who has a lot of experience with DWI cases. He or she can help you explore your options. With their help, you may be able to avoid the worst and often reduce the penalties for the offense.

Coping with a DWI case alone is a terrible idea. Fortunately, people can find a reliable DWI lawyer in Raleigh by contacting the law firm of Kurtz & Blum, PLLC. With our help, anyone charged with DWI can sleep a little better at night knowing that your case is in good hands.

If you or someone you know has been arrested for DWI in the greater Raleigh area, please call Kurtz & Blum, PLLC at 919-832-7700 for a free one-on-one consultation.