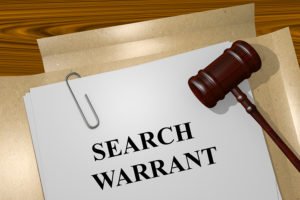 Under the 4th amendment protections of the US Constitution, police cannot enter a home without a warrant except in exigent circumstances. Very recently, North Carolina police allegedly stormed a Durham home on suspicion of marijuana, entering the premises without a search warrant and terrorizing the people inside. Some of the incident was caught on video.

The video, which was recorded by Vera McGriff, shows North Carolina police forcing their way into her home without a warrant on April 8, saying that they reported catching a whiff of a strong odor that smelled like marijuana. When the police demanded to search the house, McGriff had this to say about the incident, “I told the officer, ‘No you cannot come in my house without a search warrant.’ The officer put his foot at the bottom of the door and four of them bum rushed me…”

The other side of the story

The North Carolina police however, tell a different story. According to Officer J.M. Foster, he and his men were conducting a follow-up investigation at the location, where he saw Raynell Hall standing in the driveway and asked to speak with the homeowner. When Hall opened the door and walked in, Foster said he smelled marijuana. At that point, police decided to conduct a “safety sweep for suspects” and “seized the house.” Authorities continue to investigate the case in depth and will announce their findings in due course.

A search of a home based on exigency is strictly limited by the circumstances at the time. Most criminal lawyers agree that examples of exigent circumstances include the pursuit of a fleeing suspect or the imminent destruction of evidence. Only then might a warrantless search possibly be legally justified.

The circumstances in this case are still vague. It’s quite possible the police overstepped the limits of their authority by entering the home. The 4th amendment to the US Constitution is very clear and the Supreme Court has provided clarity in its application. However, cases like this continue to happen because the law is still confusing and not always clear.

A criminal lawyer with Kurtz & Blum, PLLC can help you if you have been charged with an offense due to an improper search.