Last month, Gov. Pat McCrory signed a piece of legislation that will have grim repercussions on the lives of 153 people. The concerned are those on North Carolina’s death row—people who have been fighting for a reduction in their sentence under the Racial Justice Act. Essentially, this act allowed death-row inmates to serve life imprisonment should they prove that racial bias played a part in their sentencing; but with McCrory’s signature, this act has now been fully repealed.

This move, as any knowledgeable Raleigh criminal lawyer would expect, was highly controversial and left death-row inmates and their families with a lot of questions. The biggest mystery at the moment is what will happen to the existing claims of racial bias and when—rather than if—executions will resume in North Carolina. Sarah Preston, American Civil Liberties Union of North Carolina policy director, believes that defense attorneys will try to push through with the claims because they were filed while the law was still in effect.

The Racial Justice Act of 2009 was aimed at “correcting racially biased sentences,” and is not about doing away with the death penalty. Both supporters and detractors of the Racial Justice Act have given their opinions on its repeal. Preston is among the former, and asserts that many studies have demonstrated that racism is often at play in capital murder trials.

One Michigan State study cited that black jurors were stricken from North Carolina capital cases by prosecutors twice as often as other races over twenty years. On the other hand, detractors such as Wake County District Attorney Colon Willough by have claimed that the Racial Justice Act actually aims to circumvent the death penalty. Detractors say that the Act impedes the proper order of the justice system and promotes no justice for anybody; instead it delays justice for the victims involved in the cases.

In any case, the repeal of the Racial Justice Act has been dubbed a step backwards for racial fairness by some lawyers. Talking more about the issue of the death penalty itself, many lawyers believe that sentencing is often handled unfairly, which is why many are opposed to it. Howard Kurtz, an experienced Raleigh criminal attorney with Kurtz & Blum, PLLC, weighs in on the matter, saying that “The Racial Justice Act was groundbreaking in that people who might have been unfairly sentenced to death because of their race had the right to challenge that sentence.”

The full consequences of the repeal are still uncertain for the death-row inmates of North Carolina. What is certain is that those on death row can no longer file new claims, and the court system will have to decide if the repeal should be applied retroactively. As judges have immense leeway when it comes to imposing sentences in court, it is important to have a qualified criminal defense lawyer by your side to ensure that you receive a humane and fair sentence. 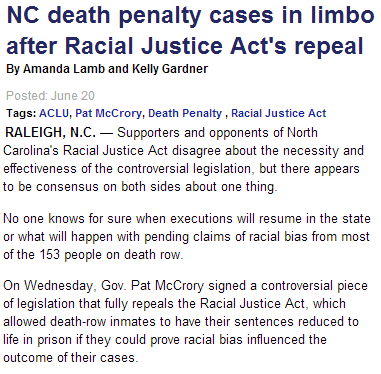