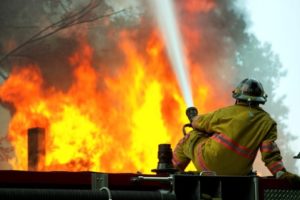 A late night fire at an apartment building in 611 Peyton Street in south Raleigh had residents leaping for safety to escape the gushing flames. Although some injuries were reported, there were, fortunately, no casualties. WRAL.com provides more info on the unfortunate incident.

“Several people were hurt when they were forced to jump from the third floor of a Raleigh apartment building after a fire broke out late Sunday.

Authorities said they are investigating what sparked the blaze, which began shortly before midnight at 611 Peyton St. and spread to 12 apartments.

Raleigh Fire Battalion Chief David Whitley said eight people jumped. Seventeen people were taken to the WakeMed and Duke Raleigh hospitals. The extent of their injuries was not immediately clear.

Raleigh Fire Department officials said it could be days before they determine the cause of the fire. They said there was a fire in the same building about three years ago.

The property manager said the apartment where the fire started was newly renovated and equipped with a smoke detector. He said he will try to offer tenants another place to live or help with relocation however he can.”

While the cause still remains unknown and it may take time for the authorities to find anything conclusive, it is certain that this was a tragic event and the lives of the tenants have been dramatically affected. Only time will tell if there is any evidence that the cause may be due to negligence or if it is just a freak accident.

Oftentimes in a fire disaster, those who do not have any bodily injuries could still suffer tremendous mental emotional distress.

If you or someone you know ever suffers from similar circumstances, it may be helpful to know that they could possibly be entitled to monetary compensation for physical and emotional injuries or for actual damaged property.

However, pursuing a legal claim will almost certainly mean dealing with a long, complicated and confusing litigation process, not to mention the mountain of paperwork required to be completed in a timely manner. Thus, if anyone you know wishes to pursue a personal injury complaint, it’s always best that you seek the help of a knowledgeable Raleigh personal injury lawyer.

A personal injury lawyer will have the experience and legal know-how to be able to answer any questions you may have, counsel you about the best course of action to take, and even provide you with the representation you need in court.