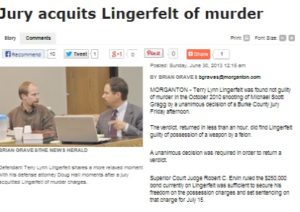 In June, a North Carolina case against a man accused of murder ended in an acquittal. Brian Graves reports in hickoryrecord.com:

Terry Lynn Lingerfelt was found not guilty of murder in the October 2010 shooting of Michael Scott Gragg by a unanimous decision of a Burke County jury Friday afternoon.

The verdict, returned in less than an hour, did find Lingerfelt guilty of possession of a weapon by a felon.

A unanimous decision was required in order to return a verdict.

The report goes on to explain the reason behind Lingerfelt’s acquittal:

The jury accepted Lingerfelt’s story that Gragg was someone who displayed violent tendencies which were amplified by his drug use and his constant carrying of guns on or near his person.

Terry Lynn Lingerfelt was charged with the homicide of Michael Scott Gragg, who was found dead on the scene in Morganton, NC in October 2010. Lingerfelt maintained he shot Gragg in self-defense, believing Gragg was going for a weapon when the latter reached down to his shoe. What eventually worked in favor of Lingerfelt was the testimony of a forensic toxicologist that Gragg had high levels of the drug methampethamine in his blood, which has been proven to affect a user’s psychological state. Additionally, other witnesses testified about Gragg’s drug use and violent tendencies.

While the events surrounding this case may be sad and tragic, the outcome is a validation of the essence of the law—that every person accused of a crime or wrongdoing is innocent until proven guilty. The case highlights the need for the right representation for anyone who has to face the legal system, in order to credibly present their side of the story. Hence, any resident of Raleigh, North Carolina who may be involved in a criminal case should seek the help of a seasoned Raleigh lawyer for his defense.

Terry Lynn Lingerfelt may have pulled the trigger which ended the life of Michael Scott Gragg, but the circumstances as presented during his trial suggest that he acted within the bounds of the law. Competent attorneys in reputable Raleigh law firms such as Kurtz & Blum, PLLC can thoroughly comb through the details of a case and effectively apply the law to help vigorously defend their client. The work these lawyers perform is integral in keeping the spirit of fairness and impartiality that the US justice system was founded on.

If you or someone you know has been charged with a crime in the greater Raleigh area, please call Kurtz & Blum, PLLC at 919-832-7700 for a free one-on-one consultation.