The trial of Florida volunteer neighborhood watch captain George Zimmerman over the fatal shooting of Trayvon Martin has taken another turn. Jurors heard testimonies from Sanford Police Department officer Doris Singleton and investigator Chris Serino as they recounted Zimmerman’s narrative of what happened on February 26, 2012. His written and recorded statements, as well as a video reenactment, are the only materials currently available to the jury, as the defense declined to say whether Zimmerman himself will take the stand.

The circumstances behind the Martin shooting, which has sparked discussions over applications of Florida’s “castle doctrine” laws, is enough to strike a nerve among North Carolina natives, as the state’s own “castle doctrine” law is not much different from Florida’s. Zimmerman has maintained that he shot Martin in self-defense, and the prosecution wants to pin him for second-degree murder. Such a situation may warrant further study from a trusted Raleigh criminal lawyer, such as those working at Kurtz and Blum PLLC.

Florida and North Carolina’s castle doctrine laws permit the use of force-on-force in personal defense cases, especially if the person under threat may be on the receiving end of deadly force. As read by Singleton in court, Zimmerman’s statement revealed that Martin surprised and beat him up. The assault and Martin’s purported threats of killing Zimmerman reportedly prompted the community watchman to shoot the victim at pointblank range.

Serino, the lead investigator in the Trayvon Martin case, has taken the stand as the prosecution’s leading witness. He walked the defendant through the video reenactment a few days after the incident.

However, the Sanford Police Department detective claims in his questioning by the FBI that he was pressured by colleagues to file manslaughter charges against the defendant as community protests flared up after the shooting.

The alleged self-defense element of the Trayvon Martin case has only fueled protests from a divided public, many of whom believe that the victim was racially profiled by the defendant and then attacked. Singleton has further claimed in her cross-examination that traumatic experiences such as shootings may affect a person’s ability to remember everything, and that the defendant did not express any ill feelings toward the victim.

People who are exposed to the use of deadly force and fear great bodily harm or death have the right to use appropriate force to ward off intrusion under castle doctrine regulations. The descriptions in Zimmerman’s own statement and the video reenactment may fall under that category. An experienced Raleigh criminal attorney—like Howard Kurtz of Kurtz and Blum, PLLC—will give defendants a fighting chance, helping them establish that they fought back in self-defense. 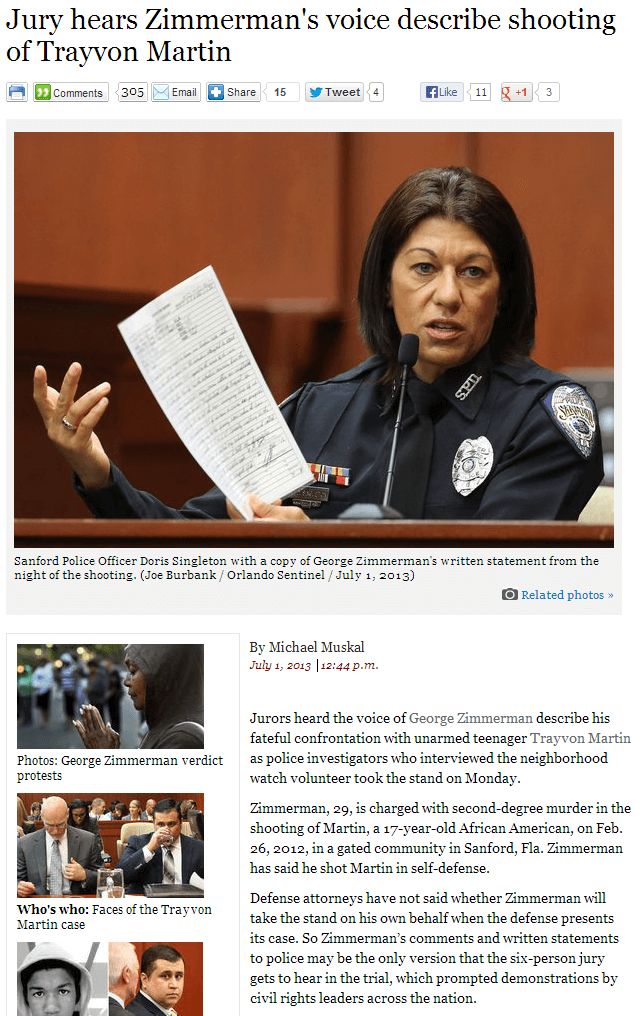