Erosion of 4th Amendment Rights Against Unreasonable Search and Seizure 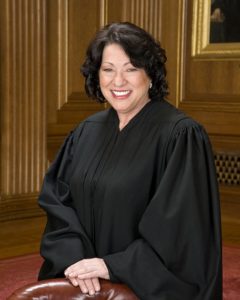 Justice Sonia Sotomayor has written a number of dissents during her short term on the Supreme Court, but her most important dissent may be on the case of Utah v. Strieff, which questions whether or not prosecutors can use evidence obtained by police after illegal stops. The broad repercussions of this case are just another example of why it is so important to retain a criminal lawyer to defend your constitutional rights.

In 2006, Douglas Fackrell, a narcotics detective with the South Salt Lake City Police Department, was conducting a surveillance of a residence he believed to be involved in drug activity. Detective Fackrell watched several people, including Edward Strieff, enter and leave the house. He interpreted these short visits as possible signs of “drug activity” happening inside the house.

Despite not knowing whether Strieff’s visit to the house in question was a short one, Fackrell followed Strieff to the nearest 7-11parking lot and questioned him about his visit. Fackrell also relayed Strieff’s personal information to the police dispatcher as part of routine practice during police stops, and it was discovered that Strieff had an outstanding warrant for an unpaid parking ticket. Fackrell arrested Strieff based on this warrant and when Strieff was searched, the detective discovered a small amount of methamphetamine in a plastic baggie.

“Subject of a carceral state”

With the legality of the search in question, on appeal the Supreme Court upheld that evidence found during interactions during unlawful police stops could still be used to prosecute, especially if the officers found an outstanding arrest warrant. According to many legal scholars this ruling further weakens the protections guaranteed by the Fourth Amendment.

The most thundering dissent came from Justice Sotomayor, stating that “the discovery of a warrant for an unpaid parking ticket will forgive a police officer’s violation of your Fourth Amendment rights.” She further explained, “Do not be soothed by the opinion’s technical language: This case allows the police to stop you on the street, demand your identification, and check it for outstanding warrants – even if you are doing nothing wrong.”

Sotomayor added that officers should not be allowed extend an illegal stop, especially if an officer discovers a warrant for a fine a person forgot to pay. She further suggested that courts should not be able to admit into evidence anything an officer happens to find while conducting an illegal search under these circumstances.

The ruling of the Supreme Court Justice seems to dramatically diminish an individual’s rights guaranteed by the Fourth Amendment, as improperly obtained evidence will be accepted by most courts. Therefore, it’s more important than ever that you get assistance from an experienced criminal lawyer, like one at Kurtz & Blum, PLLC to uphold your constitutional rights if you’ve been charged with a crime.