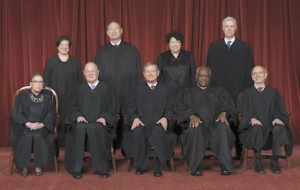 This term is set to be one of the most impactful for years to come. “There is only one prediction that is entirely safe about the upcoming term, and that is it will be momentous,” said Justice Ruth Bader Ginsburg at an event recently. The Supreme Court will be addressing gerrymandering, the First Amendment, immigration law, and probable cause. Here are a few of the cases to keep watch:

Is “crime of violence” void for vagueness? That is the question being answered in this case. A crime of violence subjects a noncitizen to mandatory removal. Before answering the question, they will answer whether the Constitution applies to judicial review of the immigrations laws. Historically, the Court has been hesitant to review immigration laws because of the plenary power doctrine.

Because immigration is a question of national sovereignty, the plenary power doctrine gives the legislative and executive branch of government to regulate all aspects of immigration law. In recent times, the Supreme Court has been willing to address certain immigration law issues.

Religious freedom vs. equality vs. the First Amendment. This is a case you probably heard about in the news. Jack Phillips, a talented cake artist and a Christian, refused to create a custom wedding cake for two men, Craig and David Mullins. The Colorado Civil Rights Commission determined that Mr. Phillips violated the public accommodations law and ordered various corrective measures. Rather than adhere to those measures, Mr. Phillips stopped making cakes. Mr. Phillips’ argument is that the commission’s order violated his First Amendment rights.

A crazy party a la Project X lands in the Supreme Court. (Watch the Video)

This case deals with whether police officers had probable cause to arrest a group of people at a party at a vacant home.

The Court is also set to answer whether, even if the officers did violate the party-goers’ Fourth Amendment rights, can they sue the police or are they immune from suit. Those attending the party alleged that they were invited to the party by “Peaches” or “Tasty.”

The officers ultimately arrested many of the party goers for trespassing. The partiers’ argument is that they did not know that they should not have been there, especially since they were invited there by someone who seemed to have permission to be there.

Partisan gerrymandering. How far can legislators go when redrawing district lines in order to benefit one party? The Supreme Court has been clear that race cannot be used to redraw maps, except under the most limited circumstances. The Court will either address the issue straight on, by declaring a manageable test for partisan gerrymandering or state that there is no working standard available and punt the question for another day.

Want to hear more about gerrymandering and a potential solution? Listen to More Perfect’s podcast episode called “Who’s Gerry and Why Is He So Bad at Drawing Maps?”

Want to learn more about the upcoming cases and cases already argued?