A Warning from a Raleigh Personal Injury Lawyer to Teen Drivers: Texting Can Wait 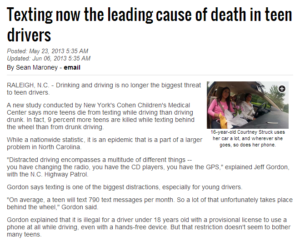 North Carolina ranks fourth in the U.S. for car crashes. Among these cases are accidents resulting in teenage fatalities due to texting while driving. Cases like this require the services of an experienced Raleigh personal injury lawyer. According to a recent report at WNCN, nine percent more teens die from crashes caused by distracted driving than from drunk driving incidents.

It is illegal for a driver under 18 with a provisional license to use a phone at all while driving in North Carolina. Accidents typically happen within the four seconds it takes to read a text; these four seconds are enough for a car going 55 mph to cover the length of an entire football field. It is disheartening to note that the majority of teenagers still use their cell phones while driving, thinking that using a hands-free device or glancing at their phone while at a stop sign is okay even though it is very clearly not.

The North Carolina State Highway Patrol has taken its campaign, ‘W8 2 TXT’, to high schools. Here young and future drivers can listen to the stories of survivors and victims. Instructors also go on test drives with students during these talks to demonstrate how not paying attention to the road, even for just a few seconds, can be dangerous. Moreover, law firms like Kurtz & Blum, PLLC that provide their services to auto accident victims encourage teenagers to put down their phones while driving, and concentrate, instead, on the road to avoid the deadly consequences of distracted driving.

Being involved in an auto accident is an extremely difficult and stressful situation, more so for young drivers. In cases wherein you believe that the other party is at fault, it is necessary to ask for rightful compensation. In such cases, hiring a car accident lawyer in Raleigh NC is advisable.

Teenagers aren’t the only ones that have to be more responsible drivers. Recent studies have also shown that adults, parents in particular, engage in distracted driving frequently, whether or not it involves texting. Changing the radio station, fiddling with the GPS, and attending to kids in the backseat are all distractions that can cause accidents as well.

Being embroiled in a legal process because of a car crash is no joke. Your choices do not affect just your future, but those of other people on the road as well. It’s important that drivers are educated about their responsibilities and the consequences of their actions if they fail to practice safe driving habits from a young age.