Home Blog Teens, Drugs and Smartphones: Replacing One Addiction for Another?

Teens, Drugs and Smartphones: Replacing One Addiction for Another? 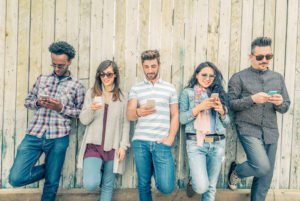 Heroin continues to dominate the news, thanks to overdoses that seem to occur every day in every region of the country. Deadly synthetic drugs seem to be everywhere a person turns, and states continue to debate the legalization of marijuana, with many already having taken this step. While drugs seem to pervade every aspect of society, one group is now engaging in the use of drugs less frequently. Surprisingly, this group is American teenagers. That’s right, apparently teens are less inclined to try drugs or routinely use them, including alcoholic beverages.

According to the 2015 Monitoring the Future survey conducted by the National Institutes of Health, teens use less alcohol, cigarettes, prescription opioids and synthetic marijuana than in the past though marijuana use remains fairly stable, with many high school seniors reporting they use it daily. However, these same students don’t perceive it as harmful as they did in the past.

Experts believe the decline in drug use may be due to the decline in tobacco cigarette use, which has long been considered a gateway to stronger drugs. Anti-drug education campaigns may also play a role in this, although they have been shown to fail in the past. Is this really the case though, or are teens developing a new addiction?

Some researchers believe that teens are using fewer drugs thanks to technology. Smartphones and tablets may be replacing the traditional elicit drugs of the past. These devices provide constant entertainment, and their use has exploded over the past decade. The interactive media works on those same impulses responsible for the teen’s desire to experiment with drugs. This includes their desire for independence and their need for sensation-seeking. However, it could simply be a case of the teen not having the time to party or engage in drugs, as they are using this time on their gadgets.

Dr. Nora Volkow, director of the National Institute on Drug Abuse, understands individuals wish to know more about the connection between the decline in drug use and the rise in everyday use of technology. She is bringing together a group of scholars in April of 2017 to further examine this topic. The decline affects every group of teens, not singling out any particular demographic, and experts wish to know why. They believe the use of technology is driving this trend and want to confirm or refute the theory. Since experts don’t all agree, it will be interesting to see what they ultimately determine is the reason behind this decline, as it does not extend to college students.

For those individuals charged with a drug offense, competent legal help is needed. Criminal defense attorneys have a keen understanding of the options available to people in this situation, including first offender drug education programs, drug treatment court and more. Law enforcement officials continue to aggressively pursue those accused of a drug offense. Teenagers and millennials often find that they are at the mercy of the criminal justice system. With the help of an experience Raleigh drug defense attorney, the scales of justice may be more evenly balanced.

Experts are thrilled with this decline in drug use among teens, as an addiction to technology likely won’t have the same ramifications as recreational and habitual drug use. Individuals who become caught up in the system, however, need to remember they are innocent until proven guilty. With the help of the attorneys with Kurtz & Blum, PLLC, every defendant can have their day in court and obtain the best possible resolution for any type of drug related court case.