Home Blog The Consequences of Fleeing from a DWI Checkpoint 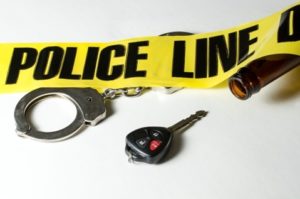 If you frequently watch shows about wild police chases or sting operations, you should know that the police usually to get their man. Ignoring a police officer’s orders to stop at a DWI checkpoint is just asking for trouble. Here’s a look at what happened to a North Carolina motorist who thought he could outrun law enforcement.

“CARY, N.C. — Wake County sheriff’s deputies arrested a man early Saturday after they say he failed to stop at a DWI checkpoint, crashed his van and then jumped out and tried to run.

Thomas Earl McLean, 33, was taken to a nearby hospital for evaluation of unknown injuries, according to Cary police.”

McLean now faces very serious charges of fleeing and eluding arrest. If convicted it is also possible that the vehicle will be sold at auction under a fairly recent NC law.

Had McLean simply complied with the officer and stopped at the roadblock, he might have only been charged with DWI. However, in his effort to elude police, the man caused property damage and may have seriously injured himself or could have serious injured others. It is possible he will still face a DWI charge.

The attorneys at Kurtz & Blum, PLLC wish to point out that motorists can still exercise their rights to remain silent and refuse to answer questions such as, “how much have you had to drink?” when pulled over for questioning. Motorists can even refuse field sobriety tests.

However attempting to flee from police will certainly result in more serious charges.

A capable DWI lawyer will look for problems with the procedures used at the checkpoint or other issues that can be used to provide a strong defense. Even if the evidence is overwhelming, your attorney will work very hard to get you the best possible outcome.

The moral to this story is clear, if you ever get pulled over at a DWI checkpoint in North Carolina pull over and deal with the police in a calm polite manner. If you are ultimately arrested and charged with DWI, the next step is to seek help from a qualified Raleigh DWI attorney.

Whatever you do, do NOT run from the law any time you find yourself being pulled over by a police officer.