Home Blog How Could Tiger Woods be Arrested for DUI When He Wasn’t Drunk?

How Could Tiger Woods be Arrested for DUI When He Wasn’t Drunk? Raleigh DWI Lawyer Explains 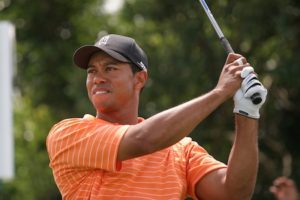 Most people think that you can only be charged with DWI if you were caught driving while intoxicated with alcohol. What they fail to realize, however, is that the cause of the “intoxication” can include any number of over-the-counter medication.

This was the lesson learned from Tiger Woods’ recent run-in with the law. According to reports, the golf champion was arrested back in May under suspicion of driving under the influence in Florida. Based on the dash-cam footage and the official reports, his Mercedes Benz had two flat tires and some other damage when police officers approached his car on the side of the road at 2:03AM.

Woods did not appear to have a clear idea of what was going on or where he was, leading the officers to have him perform a serious of roadside sobriety tests. All indications initially led them to believe that he was drunk, except for the fact that the breath alcohol test he took showed he had no signs of alcohol in his system.

The lack of alcohol in Woods’ system did not absolve him of the Florida DUI charge (referred to as DWI in NC) because he was under the influence of something else. In this case, prescription medication.

According to reports, Woods had disclosed to the authorities that he was indeed taking something, although this was redacted from the official police report provided. This medication is likely pain medication prescribed following surgery Woods underwent for his back sometime in April.

Although it was prescribed medication, and so therefore is considered legal drugs, the intoxicating effects can have on the user is enough to warrant caution against being behind the wheel when taking it. It was obvious that the drug was potent enough for him to somehow damage the vehicle before finally parking on the side of the road.

This situation should serve as a strong warning to people not drive if you are taking any prescription medication that can cause impairments such as sleepiness or lack of clarity and focus. You not only put yourself at risk, but also the other people on the road.

In the event that you do find yourself charged with a DWI under these circumstances, immediately seek the help of a DWI lawyer with Kurtz & Blum, PLLC so we may help you defend your rights.