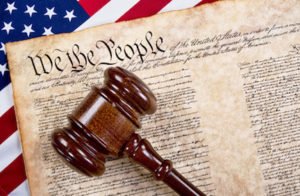 As a partner at Kurtz & Blum, PLLC and like so many Americans, I have been thinking about the election season and the future of our nation.

However, in thinking about the future, I can’t help but contemplate our history and what has led us to this particular place in time. With so many people forcefully debating their opinions about political candidates and their shortcomings in the public square, the level of vitriol has brought to mind the very document that enables us to have this debate, the Constitution of the United States and the Amendments to the Constitution.

I think it is important that every now and again, we look back and review the basics of our Constitutional rights; in doing so, it is my hope that you know and learn more about your rights. To that end, this is the first in a series of articles dealing with our constitutionally guaranteed rights, and the interplay between those rights and modern criminal law.

These articles will deal with common situations that arise frequently, and hopefully can shed some light on things to be aware of and what to look for to make sure your rights are protected as they were intended by our Founding Fathers.

In order to protect the legitimacy of the fledgling nation, it was believed that ALL the state must ratify the document; however, some states such as New York, North Carolina, and Virginia wanted specific guarantees for the rights and protections of their individual citizens against the powerful government of the United States of America. In fact, North Carolina and Rhode Island refused to ratify the Constitution until such protections were in place.

Ultimately, James Madison drafted the Amendments in 1789 and they were debated and passed by Congress, and the last State ratified the Bill of Rights in 1791.

Next, it is important that you know what the text actually says. The first amendment to the Constitution reads as follows, directing that:

Congress shall make no law respecting an establishment of religion, or prohibiting the free exercise thereof; or abridging the freedom of speech, or of the press; or the right of the people peaceably to assemble, and to petition the government for a redress of grievances.

Wow! This was huge.

England and the Crown didn’t guarantee any of those rights to its subjects, and everything in this list weighed very heavily on the minds of the young nation. They didn’t want to throw off one bad government only to replace it with a new bad government that failed to respect their individual rights and liberties.

You may be saying, are we done with the history lesson yet?

That’s great and all, but how does that have anything to do with me in the 21st century?

This Amendment plays a pivotal role in a number of cases we see in criminal court on a daily basis. For example, a common situation we see is a person encountering a law enforcement in which they are “cussin’ the cops.”

Depending on what they said, as long as they were not threatening the officers, that person’s speech may be considered protected speech. Although admittedly not a nice thing to do, cussin’ the cops doesn’t rise to the level of a criminal charge for Resisting, Delaying and Obstructing an officer in the course of his or her duties.

Under North Carolina laws, that same conduct could also be charged as Disorderly Conduct by Abusive Language, and a first amendment defense might come into play in that scenario also.

Recently, a number of people have been arrested for their roles in the “Moral Monday” protests staged at the North Carolina State Capitol building. They have been charged with crimes like Trespassing, Resisting a Public Officer, Disorderly Conduct, and Breaking and/or Entering.

The 1st Amendment has played a large role in the defense of these individuals because the Constitution guarantees people the right to assemble together a peaceful manner to petition the government for a redress of their grievances, and voice their displeasure as to the way that our elected officials are handling things.

These are just a couple of ways that our Constitutional guarantees in the First Amendment are routinely being discussed and argued about in court on a daily basis.

If you believe that your rights have been violated by a criminal charge, call the experienced criminal defense attorneys at Kurtz & Blum, PLLC today at (919) 832-7700 for a free consultation to discuss the defenses with which you may be charged.