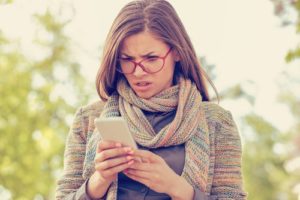 While she was asleep, her ex-boyfriend stood silent ─ observing her quietly at the foot of her bed. Without her knowledge, he had broken into her house and violated her privacy, personal space, and more. When she awoke to find him looming over her, she recalled later in court, he just stood there in silence for what seemed like “an eternity.” In a low voice, he then said: “You’re lucky it’s just me and not a robber or a bad person to do you harm.”

The two had been in a relationship for about six months, according to a report from The Washington Post. Alarmingly, this was not the first time her ex-boyfriend had broken into her house to stalk her ─ he had been stalking her for months without her knowledge.

Because he had helped the victim purchase a vehicle that came with an accompanying smartphone app, he was able to use the vehicle’s VIN to set up the app and track her movement. Using the app, he was also able to start and stop her vehicle remotely, as well as control the windows, The Post reported.

Later in court, the woman expressed how frightened her stalker’s actions had left her, according to a report from the Australian Broadcasting Corporation. “What he did is despicable and I am still trying to come to terms with the scope of violation and trauma I have experienced,” she said.

What Is Considered Stalking?

According to the United States Department of Justice (DOJ), stalking is defined as “engaging in a course of conduct directed at a specific person that would cause a reasonable person to fear for his or her safety, the safety of others, or suffer substantial emotional distress.”

North Carolina law adds: “Stalking involves severe intrusions on the victim’s personal privacy and autonomy. It is a crime that causes a long-lasting impact on the victim’s quality of life and creates risks to the security and safety of the victim and others, even in the absence of express threats of physical harm.”

In some cases, stalking can be connected to harassment, threat, or intimidation. The Stalking Resource Center (SRC) notes that some of the critical elements that define the action of stalking include:

According to the SRC, nearly 85 percent of victims know the person who is stalking them. The overwhelming majority of stalkers are former intimate partners. Tragically, stalking can progress to more violent acts in some cases, so it is crucial for victims to seek help from law enforcement and a knowledgeable attorney.

Being stalked can be one of the most frightening and traumatizing experiences in a person’s life. At Kurtz & Blum, our experienced team of attorneys can guide you through the necessary steps to gather evidence and prove your case. We will use all of the legal protections that are available to prevent you from being intimidated or harmed.

Call us now to schedule a confidential consultation.