Home Blog Can You Get Legal Help When You’re Paralyzed in NC?

A Raleigh Personal Injury Lawyer Can Help You When You're Paralyzed 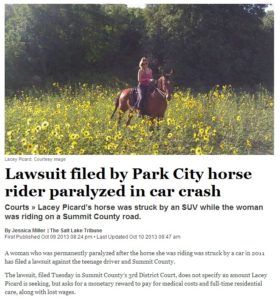 If a car accident leaves you paralyzed or partially-paralyzed, your life will be changed forever. Certainly, you will require extensive medical attention including various forms of therapy to regain any degree of independence and this will require you to spend money you might not have. Securing the resources necessary to successfully see an injury through often requires representation from a reliable Raleigh personal injury lawyer who can help you pursue full compensation for your injuries.

Below is an excerpt from a Salt Lake Tribune news article detailing the plight of an injured daughter of a North Carolinian, and her decision to finally bring her case to court..

[Lacey] Picard, 39, suffered a traumatic brain injury after the horse she was riding near Park City was struck by a car on Sept. 5, 2011. She was life-flighted to Salt Lake City, where doctors worked to mitigate the massive swelling in her brain.

The lawsuit was filed by Picard’s guardians: father, Hans Picard, who lives in North Carolina, and friend Rhonda Devereaux. Hans Picard said Tuesday that his daughter still resides full-time in Bountiful’s South Davis Community Hospital’s assisted living center. He said her progress has been “very, very slow,” and she is still heavily medicated. She has mobility of her right arm, the father said, and is currently undergoing physical therapy on her legs.

Involvement in a car crash often results in injuries. The most serious accidents can inflict major trauma to a victim’s nerves and spinal cord resulting in impaired mobility and in some cases paralysis. North Carolina laws permit those who have been paralyzed by car accidents caused by another party to obtain compensation for their physical injuries and medical expenses.

If you are injured in a car accident, a personal injury lawyer in Raleigh, NC with Kurtz & Blum, PLLC can help you understand everything that you need in order to seek compensation, including taking the issue to court. If the case goes to trial, a competent and compassionate attorney will help you build the strongest case possible.