Home Blog Your Rights Regarding Breathalyzer Tests in NC 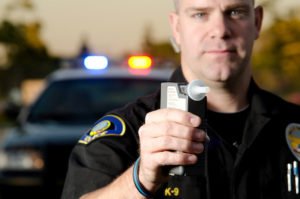 While many people think that police officers seldom run afoul of the law, the reality is that they are simply regular folks just like you and I.

But, one advantage they have is their intimate knowledge of the laws in North Carolina.

Recently, a Randolph County sheriff’s deputy was arrested on suspicion of DWI (driving while impaired) after his car was found stopped on the side of the road early in the morning.

The news article goes on to say that the deputy took a Breathalyzer test which revealed his blood alcohol content (BAC) was .15, nearly twice the legal limit.

While the article does not explicitly state whether the test was administered roadside at the time his vehicle was discovered or if he was taken to the police station, as a Raleigh DWI lawyer with years of experience defending DWI cases, I wonder why the deputy submitted to the breath test knowing that he had obviously been drinking quite a bit.

Of course, experienced police officers won’t initially inform you of such rights and typically employ a series of persuasive techniques to get you to comply with their orders so they can make a decision whether or not to proceed with an arrest.

If you choose not to submit to a portable breath test, you may be arrested and taken to the police station (or possibly a mobile testing unit) and asked once again to submit a breath test, as known as an Intox EC/IR II performed on a piece of equipment known as “The Intoxilyzer”.

Sounds like something out of sci-fi movie, doesn’t it?

Still, one important thing you should know is that you have the opportunity to call a witness (like a friend or attorney) to be present to oversee the procedure. However, they only have thirty minutes to get there.

And yet, you cannot be forced to take this type of breath test either.  By refusing such a test, you rob the prosecution with a critical piece of evidence used to gain a conviction.

However, under the Implied Consent laws of North Carolina, refusal to submit to this test will result in the automatic revocation of your driving privileges for a minimum of one year. Also, your refusal can be used against you to show guilt.

Surely, the Randolph County deputy knew that he held these rights, but chose not to exercise them.

One can only guess why. Perhaps he didn’t think he was really all that intoxicated, perhaps he thought he might be given a warning from a friendly fellow officer, or perhaps he was nervous and felt it would be best to comply with the officer’s directions.

Who knows, the outcome is still the same.

The test results provide the prosecution with incredibly strong evidence to pursue (and likely get) a conviction.  After all, it’s going to be very difficult to convince a judge or jury that he was not impaired with a BAC of .15.

So, what about the Implied Consent law and the loss of your driving privileges?

Well, it may be possible to obtain a limited driving privilege after the first six months provided you meet the eligibility requirements. Generally, that means you had a valid drivers license at the time of the arrest and haven’t been convicted of DWI or refused a breath test in the past seven years

But that is really a topic for another time

The bottom line… don’t give up your rights!  We encourage citizens to exercise their rights and generally suggest that they refuse to submit to such tests, but they should also understand the consequences.

For more detailed information, please visit our website and watch our video – What to Do If Stopped for DWI.

If you or someone you know has been arrested for suspicion of driving while impaired, call the experienced DWI attorneys at Kurtz & Blum, PLLC immediately at 919-832-7700.