Home Blog Arrests on Interstate 40 for Trafficking 130 Lbs. of Marijuana

Arrests on Interstate 40 for Trafficking 130 Lbs. of Marijuana 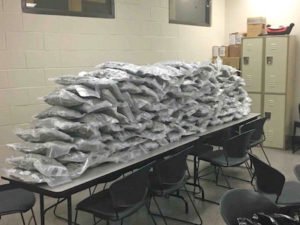 What can happen at a routine traffic stop?

For two women driving through Orange County, North Carolina last month, it turned out pulling over didn’t lead to just a simple traffic ticket – but rather arrests for trafficking 130 lbs. of marijuana.

Recently, deputies stopped two women driving a Toyota Camry on Interstate 40 for a rather routine traffic violation. When they brought out a K-9 officer, the drug-sniffing dog detected the odor of cannabis from the vehicle. It promptly discovered bags upon bags of marijuana in the trunk, worth an estimated $500,000.

The women – both from the San Francisco Bay Area – were held at the Orange County Sherriff’s Office under a $100,000 secured bond.

The amount of marijuana found in the women’s car was quite remarkable, but being charged with drug trafficking requires a much smaller payload.

“Any person who sells, manufactures, delivers, transports, or posses in excess of 10 pounds […] of marijuana shall be guilty of a felony […] known as ‘trafficking in marijuana.’”

Fines, penalties, and sentences escalate depending on how much of an illicit drug a person is caught with. In cases where the quantity is more than 10 lbs. but less than 50 lbs., the minimum fine is $5,000, and the shortest possible prison term is 25 months. In this case, the two women arrested on Interstate 40 are looking at paying at least $25,000 in fines and spending up to 51 months in prison.

The penalties could be harsher, as people sentenced for trafficking may not receive probation during their terms. A judge can grant exceptions only if they provide “substantial assistance” in identifying, arresting, or convicting other individuals possibly involved in their drug trade.

Perspectives from a drug attorney

The 130 lbs. of marijuana in the women’s vehicle might clearly indicate their guilt, but as any experienced drug attorney will tell you, that might only be one part of the story.

Who are these women, and where did they get so much marijuana? Where were they bringing the drugs from– and to where or to whom were they delivering it?

You’ve heard this many times before, but everyone is innocent until proven guilty, and the devil is always in the details. With law enforcement official also facing questions about how they deploy drug-sniffing dogs at traffic stops, not all incidents are simple open-and-shut cases.

Should you be accused of trafficking marijuana in North Carolina, contact the experienced drug attorneys with Kurtz & Blum, PLLC. We will evaluate your case, and help you aggressively deal with the potential consequences.