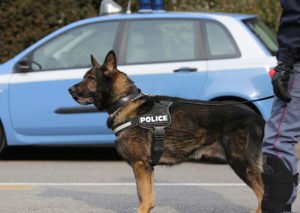 Imagine this scenario: while driving around Raleigh, a police officer pulls you over and asks for your license. He questions you and perhaps issues a traffic ticket – and then makes you wait forever while he calls for a drug-sniffing dog to arrive and inspect your car.

What should you do in such a situation? Should such a thing even happen?

According to a 2015 Supreme Court ruling, this scenario amounts to a violation of the Constitution’s shield against unreasonable seizures. An officer “may conduct certain unrelated checks during an otherwise lawful traffic stop,” wrote Justice Ruth Ginsberg in the 6-3 decision, but “may not do so in a way that prolongs the stop, absent the reasonable suspicion ordinarily demanded to justify detaining an individual.”

Without good reason, then, a police officer can only hold you for the time it takes to issue a ticket – and can only follow through with a dog-aided search if you consent to it, which you should never accept.

To be clear, one police officer can still quickly lead a drug-sniffing dog around your vehicle while a second officer writes you a ticket. The Supreme Court only outlawed extending detainment at traffic stops, not the use of the canines.

What should you do when you’re detained at a stop?

There might be instances when officers abuse their authority and refuse to dismiss you after writing a ticket. They might also insist on conducting dog-aided searches without your consent.

Police officers instinctively rely on your lack of knowledge of the law and often use this to their advantage.

As a very experienced drug lawyer in Raleigh I will tell you that the best defense against abuse is being pro-active. Protect yourself from the moment you get pulled over.

Note what time you were stopped, how long it took for the traffic violation to be addressed, how long it took for a drug canine to arrive, and what the officers’ names and badge numbers are. Never drive off or aggressively challenge an officer even if you think your rights are being disregarded. Assert that you do not consent to the search but do not impede the officer. Violations of this kind are best settled in court, not at the time of the stop.

What if you do have drugs in your vehicle?

Drug lawyers will truly have to advocate for you if a dog-led search – however illegitimate – uncovers illegal substances in your car. But just because the police find drugs in your vehicle doesn’t mean this is an open-and-shut case. The evidence against you might be suppressed if it was obtained in violation of your Constitutional rights.

Determining how and why an arrest is made is often complex. The best way to prove your rights have been violated is to hire attorneys well-versed in current case laws and examine the details of your extended detainment. The Supreme Court has made it clear that officers cannot detain longer than is reasonable.

The qualified drug lawyers at Kurtz & Blum, PLLC can help you if you are arrested for drug possession following a routine traffic stop and then unnecessarily detained while you waited for a canine unit to arrive.