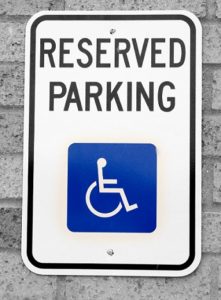 Disability Does Not Equal Inability When It Comes to Driving

Although we here at Kurtz & Blum, PLLC are primarily criminal attorneys, we also offer help in other areas such as family law and personal injury. Various areas of law often intersect and have overlapping consequences, and it is important to be aware of those instances. One of the more common ways that civil and criminal law intersect are civil Department of Motor Vehicles penalties for criminal traffic offenses. Sometimes, these issues mean that you just have to ride out a suspension, but often, there is a chance that a situation can be remedied through a DMV hearing.

There are several different types of DMV hearings: DWI chemical analysis refusal hearings, lack of insurance hearings, and license restoration hearings, to name a few. Dealing with the Department of Motor Vehicles is rarely someone’s idea of a good time – even the simplest matters can be tedious, time-consuming activities. This is even truer if you must constantly deal with the DMV just to maintain your ability to drive, as six plaintiffs to a federal lawsuit against the North Carolina DMV assert. A federal judge ruled recently that DMV has to answer allegations of illegal discrimination on the basis of disability.

We reported about the beginnings of the suit in an earlier blog post. The N.C. Department of Motor Vehicles has a Medical Evaluation Program, which is supposed to help keep state roadways safe by assessing at-risk drivers once a year to determine whether or not they can safely operate a motor vehicle. Many drivers who are part of the program are elderly individuals whose health may be deteriorating. In such cases, typically the DMV is asked by physicians, family members, or even police officers to monitor these persons to determine whether or not they have reached a point where driving would be unsafe. The plaintiffs in the lawsuit against DMV, however, were funneled into the Medical Evaluation Program at the behest of DMV employees. Although the plaintiffs underwent medical exams and submitted to additional driving tests in order to establish their ability to drive reliably, they are still required to demonstrate that ability on a yearly basis.

The lawsuit is based on language from the Americans with Disabilities Act, which states that safety measures a government agency imposes due to disabilities must be “based on actual risks, not on mere speculation, stereotypes, or generalizations about individuals with disabilities.” This language would support the idea, for instance, that a person who has had their legs amputated due to an injury may be required to demonstrate that they can competently operate a motor vehicle using only hand controls. The vast majority of drivers learn to drive by using their feet to push the gas and brake pedals, and there is an “actual risk” that someone unused to driving with hand controls only might cause an accident. However, this language would not support that same individual from having to take a driving test every year to prove that they can still use hand controls to drive their car. In other words, the Medical Evaluation Program as it is currently administered to disabled individuals could well be considered discriminatory under federal law, because the constant evaluation of disabled drivers seems to be based on mere speculation of risk.

DMV hearings can serve the important purpose of ensuring the security of all drivers on public streets and highways, but I completely agree with the ruling of the federal court in this case. Disability alone does not equal danger. While I see nothing wrong with the DMV giving extra scrutiny to drivers with certain health conditions when initially issuing a license, or doing so after those conditions manifest, this should not require those individuals to have to continually prove themselves forever after. Frequent evaluation makes sense for someone with a condition that causes them to degenerate over time, but not for people with a stable conditions that do not affect their ability to operate a motor vehicle. Whatever good intentions the DMV may have had in putting the plaintiffs into the Medical Evaluation Program in the first place, the plaintiffs have clearly (to me, at least) gone above and beyond what could reasonably be expected of them in order to be able to drive. Although the state of North Carolina views driving as a privilege, rather than as a right, it is patently unfair to force disabled people to jump through so many hoops to convince some bureaucrats that they have the capacity to operate a car. Although the lawsuit is still in the early stages, I for one am wishing the suit’s plaintiffs the best of luck in their endeavor to bring more transparency and equality to the inner workings of the DMV.