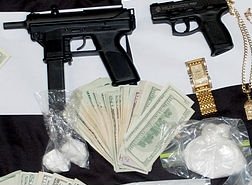 Two men are arrested for the same crime. For the sake of this example let’s call them Avon and Ziggy. Each of them is pulled over by police, his car is searched, and the cops find a large bundle of cocaine taped under the backseat. The case against each one is airtight: the police did their jobs, didn’t violate anyone’s rights, and both Avon and Ziggy are on the hook for the same cocaine trafficking charges.

Let me tell you a little bit about these two men. Avon is the leader of an immense network of drug dealers in Baltimore. Millions of dollars in drugs, cash, and weapons pass through his hands each month. His gang is highly organized and regimented, with lower level dealers reporting to local bosses, who report to lieutenants, who report to Avon. Though he doesn’t get his hands dirty all that often anymore, driving a shipment of cocaine across state lines isn’t a new experience for him.

Ziggy, on the other hand, is the little fish to Avon’s shark. He called in every favor he could think of to get this coke, which was going to be his big break. He was going to move it a little bit at a time, by himself and with help from some friends. “We’ll triple our money!” he told them, excited.

Some blue lights and a drug sniffing dog later, though, and both men are on the fast track to federal prison. Their stories are as different after their arrests as they are before. Though convicted of the same crime, they end up with remarkably different sentences. Well, of course! Avon’s been doing this for years and is a scourge on the city of Baltimore. Of course his sentence should be longer.

But that’s not what happens. Each man pleads guilty to federal cocaine trafficking charges, but Avon, the drug kingpin, is back out on the streets far sooner than Ziggy could ever hope to be. How is this possible? To understand, we need to take a look at the interplay between two mainstays of federal drug sentencing: substantial assistance and mandatory minimum sentencing. First, though, it’s probably good to go over criminal sentencing in general.

In a criminal prosecution, there are two main phases. In the first phase, the issue is whether or not the defendant is guilty of the crime he or she is charged with. This is what you see most often in courtroom and crime dramas, and it ends with a verdict of guilty or not guilty (though of course, the vast majority of criminal cases end with a guilty plea and never go to trial). If a defendant is found guilty, whether by trial or plea, the court has to figure out what that person’s debt to society will be–how long we need to lock him up for.

This is usually done at a sentencing hearing. Much like in a trial, at a sentencing hearing both the prosecution and defense present evidence. Instead of showing guilt or innocence, though, they’re trying to show how long they think the defendant should spend in prison. The rules are looser here: while trials have a relatively strict set of rules governing whether evidence is admissible, a lot of information that could never have been used at trial comes out at the sentencing hearing.

That’s partially because of the nature of what each side is trying to prove. The prosecution is trying to prove “aggravators,” facts about the defendant or case that show a harsher punishment is necessary. The defense tries to prove “mitigators” which have the opposite effect. Aggravating and mitigating factors can include obvious, provable things such as the defendant’s criminal history. However, courts will often consider more nebulous factors such as the defendant’s contributions to the community or family situation–hence the looser evidentiary rules. 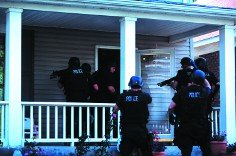 At sentencing, a federal judge first figures out the “range” in which a defendant can be sentenced. For a drug possession crime such as the ones committed by Avon and Ziggy, this decision will take into account factors including the defendant’s prior record and the amount of drugs in the defendant’s possession. Let’s say Ziggy and Avon had similar criminal records, and the sentencing judge determined that the sentencing range for each man, based on federal guidelines, was 60 to 84 months. The judge would then apply the more nebulous factors not specifically named in statutes or rules to determine where in that range the defendant should be sentenced.

But there’s a problem! Though the federal sentencing guidelines may have come up with that range of 5 to 7 years for this particular crime, the judge’s hands are tied by the existence of mandatory minimum sentences. In 1986, as part of the war on drugs, Congress passed the Anti-Drug Abuse Act which, among other things, set lower limits on the prison terms that could be handed down for drug crimes.

There are very few ways to avoid getting hit with this mandatory minimum sentence. The primary method is what’s called “substantial assistance” and, bizarrely, seems to help the Avons of this world out without cutting the Ziggys any breaks.

As part of the 1986 law that created mandatory minimum sentences for drug crimes, Congress directed the U.S. Sentencing Commission to establish sentence reduction incentives that would decrease sentences in exchange for assistance in the investigation or prosecution of another criminal. Basically: if you snitch, we’ll cut some time off of your sentence.

This helps the informant in two ways. First, it can cut some time off of the range, often around 15%. Ziggy and Avon’s range of 60 to 84 months is now something like 51 to 72 months. More importantly, the mandatory minimum no longer applies. This means that giving “substantial assistance” is, in this case, the difference between a mandatory sentence of ten years and one that’s potentially less than five. That’s a huge difference.

Corruption of the Intent of Substantial Assistance

In creating the substantial assistance exception to mandatory minimums, Congress and the Sentencing Commission’s goal was noble enough. The idea was that law enforcement agencies often catch the low guys on the totem pole, the Ziggys of the world. In exchange for a lighter sentence, the Ziggys would give information about the next guy up, who will do the same, until we start making headway against the Avons and other drug kingpins.

Here’s the problem, though. Ziggy doesn’t know anything. The corner drug dealers that get picked up all the time, whether they’re part of a larger organization or operating on their own, often don’t know much about any criminal activity outside of their patch of sidewalk. So when Ziggy gets picked up in a big coke bust, he asks his lawyer how he can avoid serving that ten year minimum sentence. His defense lawyer says the only thing that will help him now is naming names, so he asks Ziggy who he knows. A novice in the drug game, Ziggy’s answer to that is “no one.”

Avon, though. Avon knows everything. He knows tons of dealers, from low level street thugs to higher ranking officers, in his and other organizations. He knows enough people that he can pick and choose, naming the people whose arrests will hurt him the least. Even if the prosecutors know that Avon is a big deal, he can offer information that will lead to possibly dozens of arrests and convictions. No prosecutor can turn down that kind of information, even if it means letting this shark out of the tank early. Avon can provide substantial assistance. Ziggy can’t. And when everything’s said and done, Ziggy gets locked up for twice as long as Avon, not in spite of the fact but because Avon is a career drug dealer.

The rule was designed to allow investigators and prosecutors to try to move up the chain, trading time on low level offenders’ sentences to get at the big time dealers. In reality, though, those big timers learned long ago how to protect themselves from this sort of threat, and have insulated themselves from the testimony of those at the bottom. What’s left is a rule that is doing exactly the opposite of its intended purpose, reducing the sentences of exactly the people it was intended to catch. Meanwhile, the Ziggys are left to deal with harsh mandatory minimums and no options to turn to. 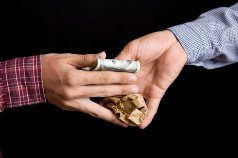 Though Avon and Ziggy are fictional characters, this isn’t a fictional problem. Departures from mandatory minimum sentences in exchange for substantial assistance is given far more often to higher-level offenders who have the most knowledge of drug operations. Cases like United States v. Chisholm abound. In Chisholm, Clarence Aaron, who had no prior criminal convictions, introduced two drug dealers to each other in exchange for $1500. That was the extent of his involvement. His co-conspirators, later faced with drug charges, led prosecutors to Aaron, describing him as a drug kingpin. Those co-conspirators, who had extensive criminal histories and actually bought and transported powder cocaine and processed it into crack, received lenient sentences in exchange for their testimony against Aaron. Aaron was sentenced to life in prison.

The co-conspirators, with their knowledge of drug activities, were virtually guaranteed to be able to think of someone to lead the Feds to when faced with their own charges. Their testimony was the only direct evidence against Aaron. Aaron, whose involvement in drugs seemed limited to arranging this single meeting, had no one to turn in.

By the nature of the game, Aaron’s co-conspirators were encouraged to make him seem as big a fish as possible. The more important the catch they give prosecutors, the more time they get knocked off their sentences. Here, the actual drug dealers got twelve to fourteen and five to seven, as opposed to the fish’s life sentence.

This “cooperation paradox,” where the more culpable defendant gets the lighter sentence because of his knowledge and connections, is not uncommon. It undermines congressional efforts at setting sentences for drug crimes, and creates fundamentally unjust results. While the idea behind substantial assistance, exchanging leniency in exchange for help in other investigations, is not a bad one, its execution has had significant unintended consequences. Federal drug prosecutors must be made more aware of the way these incentives work to encourage lying and create disparate sentencing. The best drug defense attorney works hard to ensure that the system works in their client’s favor.