Why Do I Need A Criminal Defense Lawyer If I Know That I Am Innocent? 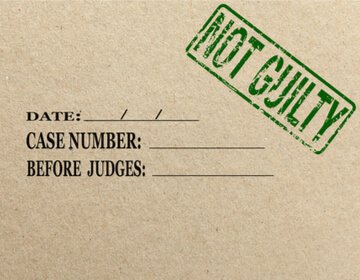 Even If You Are Not Guilty, You Should Still Have an Attorney in Your Corner

It’s simply amazing how many people believe that if you’re not guilty of a crime you don’t need the help of a good criminal defense lawyer. It seems like every day the news is filled with stories about people who spent long periods of time in prison for crimes they did not commit. Our system of justice is not perfect, it is simply the best that we have been able to develop over the course of human history.

It may be a slight exaggeration to say, but unless you are charged with failing to wear your seat belt or perhaps a parking ticket, you want the best criminal defense attorney you can find for any criminal charges you may receive.

Never forget that though Lady Justice has a scale that it is not always in balance. And do not forget that her sword, though supposedly that of righteousness, often draws the blood of the innocent as well as the guilty.

In this video clip, criminal defense attorneys Howard Kurtz and Seth Blum discuss why it is you should have learned counsel by your side, whether or not you did anything wrong. The bottom line is that once the police and prosecutors have focused on you, moving that focus elsewhere can prove an Herculean task.

The question is why you should hire a lawyer if you aren’t guilty. Many people believe that if they didn’t do anything wrong, even if they’re charged with a crime, they don’t need a lawyer. This belief springs from the notion that the truth will come out.

Sometimes this is compounded by the belief that if somebody hires a lawyer that means they must be guilty. This is the kind of reasoning that leads to people being convicted for things they either did not do or did not realize were wrong.

Since 1992, I can’t count the number of times clients have come to me after speaking with police or prosecutors because they thought if they only explained themselves that the charges would go away.

Ninety nine out of a hundred times this leads to a client making statements that cement the prosecution’s case. Nobody is intentionally hurting their own case, but when speaking directly with the prosecution, their statements can be used against them. Even seemingly harmless or helpful statements can destroy a defense.

Anyone who has watched the news for the past several years has seen a string of innocent people released from prison after they were convicted for crimes they did not commit. Greg Taylor, Darryl Hunt, Alan Gell… These are but a few examples. These are men who were convicted of murder.

The mere fact that they were innocent did not prevent them from being convicted. At Kurtz & Blum, PLLC, we will do everything within the bounds of the law, the rules of professional conduct, and within our power to stop that from happening.

Our justice system is made up of human beings. As with anything else that is human, it is flawed. The single most important thing you can do to protect your rights and your freedom if you are accused of a crime, especially a crime you did not commit, is to hire a skilled and experienced trial lawyer. Call us, we can help.