Home Blog Is Recording a Traffic Stop in NC Illegal? Definitely Not!

Is Recording a Traffic Stop in NC Illegal? Definitely Not According to this Raleigh Criminal Defense Attorney 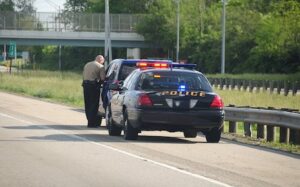 As a criminal and traffic defense attorney, I am often asked if it is legal to record a video of a traffic stop in North Carolina.

The short legal answer is… you betcha!

Recently, a Wilmington, North Carolina police officer made national news for a routine traffic stop in which he pulled over an Uber driver. During that encounter, the Uber driver, Jesse Bright, began recording the conversation between himself and the officer.

However, the conversation took a turn when the officer told Bright not to record him, and went even further to state that it was illegal for Bright to record their conversation.

Unbeknownst to the officer, the Uber driver was also a criminal defense lawyer. Bright released the video because he felt that this type of scenario may be happening a lot, but unfortunately, most people don’t know their rights and that it is perfectly legal to record their interaction with police in North Carolina.

In response, Wilmington Police Chief Ralph Evangelous stated that “Taking photographs and videos of people that are in plain sight including the police is your legal right. As a matter of fact, we invite citizens to do so when they believe it is necessary. We believe that public videos help to protect the police as well as our citizens and provide critical information during police and citizen interaction.”

The Wilmington officer involved in this incident has apparently been “counseled” on the current state of the law, although no formal disciplinary action has been taken against him for lying to a motorist and trying to intimidate a motorist into turning off the video recording device.

If you are stopped by an officer, feel free to record the incident for your safety and protection. There are no North Carolina laws prohibiting you from taking a video of the encounter on your smartphone or other device.

If you are charged with a crime stemming from a traffic stop, it is a great help to your defense attorney to provide them with a copy of the video recording, so they can see if the officers violated your rights in any way.

Contact the experienced traffic and criminal defense attorneys at Kurtz & Blum, PLLC today by calling 919-832-7700 for a free consultation, and we will ensure your rights are protected!