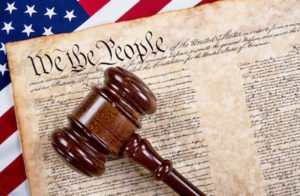 The 2nd Amendment to the United States Constitution is familiar to many people, and most would say they are aware that it is the Amendment that grants individuals the right to “keep and bear arms.” A great number of Americans are fond of their firearms, and the vast majority of people take great care to exercise gun ownership and possession responsibly.

The language of the 2nd amendment is a little different from what we know, and can be slightly misleading if you don’t read carefully: “A well-regulated Militia, being necessary to the security of a free State, the right of the people to keep and bear Arms, shall not be infringed.”

A cursory reading of the Amendment might lead one to believe that the right to keep and bear Arms is an unlimited right due to the language “shall not be infringed.” However, both federal and state legislatures have laws on the books that do place limitations on your right to own or possess a firearm, and the courts have interpreted those laws to reflect a more tempered approach to who may own or possess a firearm.

There are, in fact, a number of situations in which your firearms rights are revoked permanently or temporarily.

This article will discuss a few of the most common in North Carolina.

If someone were to be in possession of or use a firearm while a convicted felon, they would be potentially subjected to a new felony charge call Possession of Firearm by Felon, which is a Class G felony in North Carolina.

Prior to 1995, the weapons ban lasted only five years after the person completed his or her sentence, but the legislature amended the statute to create a lifetime ban on convicted felons being able to possess handguns. Later that was amended again to reflect a lifetime ban on all types of firearms, regardless of length.

Presently, the law imposes a lifetime weapons ban on convicted felons owning or possessing firearms of any kind, either at their home or business, and makes no difference whether the weapon was concealed or not. There is a blanket, across-the-board statement that a convicted felon may not own or possess a firearm of any kind.

Another situation that frequently arises in a criminal law context is the charge of Carrying a Concealed Weapon/Gun. North Carolina is an “open carry” state, meaning that citizens who are not otherwise disqualified from owning or possessing a firearm may carry a weapon on their person as long as it is clearly visible.

North Carolina also allows for people to apply for a Concealed Carry permit, to be able to carry a firearm in a manner that is not visible, such as in a purse or other manner. These permits are carefully considered and there are a number of requirements before individuals are eligible to receive this special permit.

Even when people do receive permission to carry a weapon in this manner, they are still subject to specific restrictions and limitations on their ability to carry concealed.

A couple of examples include not carrying a weapon when alcohol has been consumed, and always alerting an officer to the presence of the weapon and providing the permit to the officer during a vehicle stop situation.

Furthermore, if a person has been charged with a crime of domestic violence, even if they have a Concealed Carry Permit, that permit will be suspended indefinitely during the timeframe it takes to dispose of the criminal domestic violence case. If a person is found not guilty or the case is dismissed, they might be able to seek reinstatement of their Concealed Carry Permit, but a conviction could result in a permanent revocation of their permit, or at least a period of time that must pass before they are able to seek reinstatement of their permit.

However, in spite of these laws, many people can still run afoul of North Carolina’s laws on this issue. Carrying a Concealed Weapon/Gun cases are very fact-specific, and there is some amazing case law from 1895 that states that if even part of the weapon is exposed, it is, by definition, not concealed. State v. Lilly, 116 N.C. 1049 (1895).

A person could still be charged with this offense even if the weapon was not located on their person, but somewhere in their immediate vicinity, like under the seat in the car, or in a glove box or a backpack in the back seat of the car. Basically, anywhere you could reach and gain access to a weapon could constitute concealment if an officer were to locate a weapon.

A first conviction of this offense is a Class 2 misdemeanor, but a second conviction would increase the severity of the charge to be a Class I felony. Sometimes, depending on the factual situation, a defense attorney may negotiate with the district attorney to dismiss the charge if the person were to take a concealed carry class, and potentially agree to destruction of the firearm/weapon as a condition of the dismissal. This type of agreement usually only occurs when someone has a pretty clean record and gave the officer no problems during the encounter.

Newer legislation extended the firearms ban to include anyone convicted of a “Misdemeanor crime of domestic violence.” This has very far-reaching effects, especially for people who may be employed in a manner that requires them to be in possession of a firearm, such as military, police officers, persons who work for an armored security service or for someone who even works in a gun shop. A conviction could significantly alter or change their lives, and make them more difficult to employ. It is important to seek competent legal help with these types of cases to minimize the impact on an individual if their job requires them to possess a firearm.

Lastly, when someone is placed on supervised probation in North Carolina for ANY conviction, either a misdemeanor or felony, the judgment of the court includes standard language that while someone is on probation, they may not possess any firearms. These conditions are specifically for the safety of the criminal defendant’s probation officer, who may be required to make surprise home visits. If someone has a family heirloom firearm that was passed down from their ancestors, they may seek to have someone else they trust take care of that firearm during the period of time they are on probation.

Occasionally, we can seek special relief from the court to allow a person to possess firearms at work for work purposes only. This is solely in the judge’s discretion as to whether to allow this. If a person violates the court’s order, then they could be facing new criminal charges for possession of the weapon while disqualified.

These are simply a few of the situations in which a person’s right to own, possess, or bear arms may be limited or revoked entirely by the State or Federal Government. Anytime you are facing a criminal charge for Possession of Firearm by Felon, Carrying a Concealed Weapon/Gun or a crime of Domestic Violence, such as Assault on a Female or Felony Assault, you need competent, qualified and experienced attorneys guiding you through the court process.

Contact the dedicated and knowledgable attorneys at Kurtz & Blum, PLLC for your free consultation today at 919-832-7700.