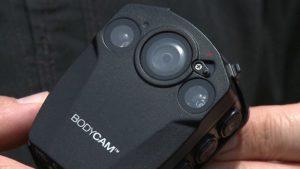 Police serve an important function in our society, and I genuinely think that the overwhelming majority of law enforcement officers do their job to the best of their abilities. While I believe that most police officers in the Triangle work to maintain professional integrity, the fact remains that our society gives cops an enormous amount of power and responsibility compared to the average citizen. For many traffic and misdemeanor offenses, a law enforcement officer’s word alone is enough to justify a conviction. Relying on an officer’s word on something like a minor traffic ticket is one thing, because the consequences of a conviction are relatively low. When it comes to a more serious offense such as an instance of child abuse or Driving While Impaired, my trust of an officer’s word goes down considerably.

In the wake of civil unrest in Ferguson, MO, President Barack Obama endorsed the use of body cameras by police in order to encourage better community-police relations. The federal government has also offered to provide 50% of the funding necessary to purchase the cameras for any state or local agency that wishes to outfit their officers. We rely on the police to protect citizens and enforce the laws of the State, but cops are human beings and no human being is perfect. Body cameras may not prevent law enforcement officers from making mistakes (which are bound to happen), but they could prevent a defendant from being unconstitutionally prosecuted due to an officer’s mistake. And I feel like body cameras would almost certainly deter cops with less-than-noble intentions from exercising their power in improper ways.

Police departments in Durham, Carrboro, Chapel Hill, Garner, and Knightdale, as well as the Wake County Sheriff’s Office, began testing the efficacy of body cams or are planning to operate pilot programs for the devices in the near future. Since early July, the Hillsborough police department has equipped more than half of its full-time police force with the body cameras. I’ll grant that Hillsborough has one of the smaller police departments in the Triangle, with only 16 full-time officers compared to the more than 700 officers employed within the Raleigh Police Department. However, the Raleigh Police Department has a correspondingly larger budget than the Hillsborough Police Department and they handle a higher percentage of serious offenses than the Hillsborough office. I would argue that this makes it even more imperative for Raleigh officers to be equipped with body cameras, but the Chief of Police here in Raleigh disagrees with me on this point.

Equipping the technology is one thing, but the law enforcement agencies are simultaneously coming up with protocols that govern when, where, and why it would be appropriate to turn the cameras off in the line of duty. As Duane Hampton, chief of police for the Hillsborough Police Department was quoted as saying, “What happens if a civilian requests that the camera be turned off? What if the officer is in someone’s private home?” And some law enforcement agencies like the Raleigh Police Department aren’t yet sold on the idea of body cameras because of concerns that they would discourage people who wish to provide information to police anonymously from coming forward to speak with patrol officers. It seems to me that this concern could be addressed through implementing certain policies or protocols, but I’ll grant the Raleigh police that it is a worthy point to consider when exploring the possibility of equipping officers with body cameras.

The cameras aren’t necessary for recording most police-civilian interactions, but could prove invaluable in those instances where police brutality is alleged or there is reason to believe that law enforcement officers are obscuring the truth (to say nothing of outright lying). Although our office has used footage from dashboard cameras to assist in defending our clients, dashboard cameras have their limitations. For one thing, the dashboard cameras often have blind spots that make it difficult or impossible to see certain angles during a traffic stop or during field sobriety testing for DWIs. For another, having the dashboard camera fixed to a police vehicle means that any investigation or police work that doesn’t occur at the roadside isn’t captured – and we can hardly ask an officer to require all crime victims or criminal suspects be interviewed in front of a patrol vehicle. With body cameras, defense attorneys and prosecutors could see firsthand the appearance of alleged victims of violent assaults, could get a better view of how field sobriety tests for DWIs are conducted, and could have a better idea of whether roadside vehicle searches were performed constitutionally.

While I’m cautiously optimistic about the use of body cameras in the future, I’d like to reiterate a point I’ve made previously that the footage from those cameras are only as good as the ability of the public to access that footage. If police departments demonstrate that they are unwilling to turn over video from body cameras to attorneys, or if departments don’t put policies in place to deal with appropriate requests for body camera recordings, then the body cameras aren’t worth the parts they’re made from. The cameras become, at best, glorified window-dressing to make the public feel better about police integrity. If implemented with the goal of transparency in mind, however, I believe that body cameras can be powerful tools of justice.