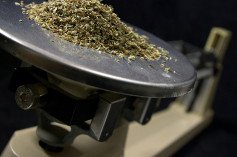 The Unexpected Effects of Legalized Marijuana

Drug-related offenses account for a fair amount of the cases we see here at Kurtz & Blum, PLLC, and a not-insignificant number of those cases are marijuana related. Throughout the United States, marijuana arrests make up half of all drug-related arrests for the past 20 years, according to data collected and complied by the Federal Bureau of Investigation. And though the most violent thing about most habitual pot users is a craving for a particular food, the consumption of marijuana in America has helped violent gangs in Mexico to form strong drug-running cartels whose influence reaches farther across the border than most citizens might expect.

According to statistics from the federal Drug Enforcement Agency, in 2011, seven major Mexican cartels were responsible for the majority of the illegal drug trade in heroin, marijuana, and crystal meth in more than 1000 cities throughout the United States. It was estimated that the cartels were making up to 40% of their profits from the sale of marijuana. However, it seems that the cartels have stopped growing as much marijuana for distribution in the United States, and there is an entirely predictable reason for this: increased legal production of marijuana domestically.

While marijuana possession is still completely illegal under Federal law and under the laws of most states, an increasing number of states have legalized the use of pot with a medical dispensation or have decriminalized its possession in small doses. Two states, Colorado and Washington, have legalized marijuana for recreational use. A 2013 survey by the Pew Research center indicates that more than half of Americans support legalization of marijuana. And although marijuana possession can still be a Federal crime, the U.S. Department of Justice has taken a stance on harsh mandatory minimum sentences for minor drug offenses as part of a “Smart on Crime” initiative aimed at curbing the growing Federal prison population. In Colorado, the state revenue taxes on the sale legalized marijuana have exceeded expectations, and commentators predict that less of the budget will have to go towards to criminal justice system because of no longer needing to enforce laws against marijuana possession.

That being said, legalization of marijuana is not a simple matter that produces a net benefit across the board. As I mentioned in a previous blog post, there is no shortage of illegal drug usage in Wake County. The narcotics trade is alive and well here in the Oak City, and there has been a notable uptick in the rates of heroin usage in the Raleigh metropolitan area. Part of what is fueling the increase in heroin use in the Triangle seems to be the increase of legally available marijuana in Colorado and Washington. As marijuana becomes less profitable to grow, cartel farmers have begun growing opium poppies. Prior to 2011, the vast majority of opium poppies were grown in Afghanistan, which accounted for 87% of the global supply of raw opium. However, poppy production has increased by 600% in Mexico since 2007, and the cartels have ensured that Mexico has become the second largest producer of heroin in the world. Mexico and Columbia are responsible for more than 90% of the heroin supply within the United State, and even the Colombian cartels tend to transport their goods across the U.S.-Mexican border. U.S. law enforcement personnel seized over 2000 kilos of heroin along the border with Mexico in 2013, more than five times the amount seized in 2007. At the same time, seizures of marijuana along the border have plummeted. In other words, because marijuana became less of a cash cow, the cartels shifted products in order to keep illicit drug money flowing into their coffers. And as a result, now the black market has been flooded with a narcotic that has much more serious consequences for use than marijuana.

Personally, I support the legalization of marijuana for recreational use because its adverse effects physiologically and psychologically are less than that of alcohol, and because people are going to continue to smoke weed whether it is legal or not. As the Prohibition Era has taught us, criminalizing intoxicants is not enough to stop their use; it just sends the use underground. It would further benefit society by no longer clogging up our court systems with people who just want to enjoy a different kind of buzz, as well as opening up a new avenue to collect taxes. I’m not naïve enough, however, to assume that legalization of marijuana is enough to cure all of society’s ills. As evidenced by the fact the increased availability of marijuana domestically has at least somewhat influenced heroin production across the border, the issue is far too complex to reduce to black and white.

What is clear, however, is that across the board prohibition has not worked to curtail drug use, and we as a society are going to need to adapt our strategies of how we handle drug-related crimes. It’s the 21st century, and we need 21stcentury solutions to these issues.