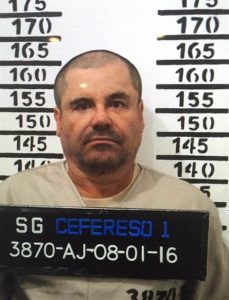 We’ve spoken about drugs before on this blog. As a firm that practices criminal law, drug and alcohol offenses are among the most frequent reasons we end up standing next to defendants in court. Although most of the time, criminal defense attorneys interact with clients who are charged with low-level drug crimes such as possession of a controlled substance or possession of drug paraphernalia, not infrequently are we called upon to represent people who are much deeper in the drug game.

Joaquín Guzmán Loera, better known by his nickname “El Chapo” is an infamous Mexican drug lord who made headlines in July of last year when he escaped from Mexico’s most secure prison using an elaborate tunnel system. He was back in the news late last week after he was re-captured in the Mexican state of Sinoloa after being on the run for almost six months.While he is currently being held by Mexican authorities, there are already discussions about whether or not El Chapo will be extradited to the United States to face charges here.

Guzmán’s capture allegedly was due in part to the drug lord’s desire to see his life turned into a movie. Guzmán had been meeting with members of the Mexican film industry while on the run, which allowed authorities to track his movements and determine his location. The notorious criminal even gave an interview to American actor Sean Penn to be published in Rolling Stone magazine. While El Chapo probably rightly believed that a story of his life would make for an exciting movie, the violent realities of the illegal drug trade are not generally thrilling for the people that have to live through them. Rape, robbery, and homicide are the tools of drug lords like Guzmán – while he insists that he personally does not engage in violent acts as part of his business, Guzmán is estimated by Forbes magazine to be worth roughly $1 billion due to his black market dealings. Money like this is not “clean” if it comes from drugs and there is absolutely blood on El Chapo’s hands because of his work.

In his interview with Sean Penn, the drug kingpin quipped, “I supply more heroin, methamphetamine, cocaine and marijuana than anybody else in the world. I have a fleet of submarines, airplanes, trucks and boats.” Those vehicles have been used to smuggle drugs across the border into the United States and more frequently, Mexican cartels are using Raleigh as a jumping off point to reach other parts of the East Coast.

Wake County and the Triangle area at large have seen a population boom over the last decade. Earlier this month, Wake County Sheriff Donnie Harrison asked Wake County Commissioners to approve additional drug investigators for the Sheriff’s Office. In Sheriff Harrison’s words, Wake County’s location near interstate highways makes it “a designated staging area for large narcotics operations.” Harrison cited findings from a U.S. Justice Department report that stated Mexican cartels are shifting some of their Southeastern operations away from Atlanta, GA and into North Carolina. The Sheriff’s Office has seen increases in drug trafficking in both cocaine and heroin in recent years, and Sheriff Harrison worries that his office is not catching as many offenders as it could. Additionally, the quality of the narcotics being recovered is increasing, meaning that the product being seized by law enforcement hasn’t been cut with other substances to stretch it out before selling it at street level. This means that the high-quality product can be transferred more easily to other places, where it then can be cut for street level sale. This seems to agree with Sheriff Harrison’s assessment that Raleigh is becoming a drug trade hub.

While I don’t disapprove of Sheriff Harrison’s desire for more law enforcement officers, I’d be more happy to see society taking steps to legalize drugs, or at the very least begin treating users as a public health matter rather than a criminal justice matter. Although legalization of any kind of illegal drug isn’t even a glimpse on the legislative horizon, North Carolina seems to be taking steps to treat at least heroin use as a public health issue. Law enforcement is being trained on how to administer Naloxone to people overdosing from heroin injection and lawmakers are making more resources available to people trying to overcome the grips of heroin addiction. Yet if Raleigh is becoming the way point for the international drug trade that Sheriff Harrison fears it to be, a few extra officers are not going to be enough to stem the tide of what is to come.El Chapo may be once again behind bars, but there are others like him, others who will continue to illegally smuggle drugs into this country and this county as long as it remains profitable to do so.