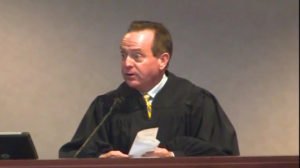 Not even judicial officials are immune from making poor decisions, even ones that cause them to wind up in courtrooms themselves. Wayne County Superior Court Judge Arnold Ogden Jones, II has found himself in hot water after he allegedly made a request to an FBI agent to get copies of text messages exchanged between two phone numbers. While on the surface, this particular claim of wrongdoing is less salacious than say, charges of possessing large quantities of drugs or an assault of some kind, the ramifications of this accusation could affect the rest of Judge Jones’s life as he knows it.

The Judge’s request was initially made on October 10th, 2015. Over the course of the following 2 weeks, Jones is said to have continued to contact the Agent about getting information from the two phone numbers. On October 19th, 2015, the FBI Agent (who at this time continues to remain unnamed) informed Judge Jones that there was no probable cause to provide the information the Judge was requesting. The Agent did, however, inform the Judge that he would keep trying to get the data if that was what the Judge wanted.  The Judge then divulged that the desire to see the text messages was something of a family matter and that the Judge did want the Agent to continue pursuing the data. The FBI Agent and Judge Jones met in a vehicle on October 27th, 2015 where they discussed the fee for obtaining the information. The alleged going rate for such a service, in the eyes of Judge Jones at least, was at first simply a couple cases of beer before finally topping out at a payment of $100 case. Judge Jones was indicted on three separate federal charges of promising and paying a bribe to a public official, promising and paying a gratuity to a public official and corruptly attempting to influence an official proceeding. He appeared in court last week before a United States Magistrate and was released without bail, so long as he continues to make future appearances in court.

It’s sad truly that this has come to pass, because in spite of this black mark on his record, Judge Jones has done a great deal of good for the criminal justice system in this State. He is the chair of the North Carolina Innocence Inquiry Commission, a first-of-its-kind organization which has the authority to bypass the judicial system in order to overturn wrongful convictions. Since the Commission began operations eight years ago, hundreds of innocence claims have been reviewed and several inmates have had their guilty verdicts overturned. Although at this time the Commission has issued no statements with regards to Judge Jones, it seems an unfortunate fact that his good works with that organization may be unavoidably tainted by this scandal.

Jones’s status as a judge remains to be seen. The behavior of judges is governed by the North Carolina Code of Judicial Conduct, and violations are weighed by the N.C. Judicial Standards Commission, a thirteen member board that includes a member of the North Carolina Court of Appeals, two Superior Court judges, and two District Court judges. There is a good chance that the Standards Commission will hold off on making a determination of Jones’s status until after more work has been done on the federal case, but his position as a Superior Court Judge is in jeopardy due to these accusations.

I fully believe that we should hold judicial officials to a higher standard than we do average citizens. As the saying goes, ignorance of the law is no excuse, and by that logic a complex knowledge of the law means that you are even more culpable for your illegal actions than otherwise. Judge Jones had to have known that what he was requesting was outside of the law and he should, by all means, be held accountable for any wrongdoing that may have occurred. That being said, it is a shame to see someone who has done good for some of the most vulnerable members of our State being brought low in such a fashion. Even if these accusations turn out to be unfounded (which seems unlikely at this point), Judge Jones’s good name has been forever tainted.