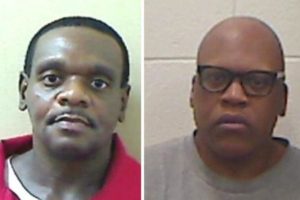 One of the most abhorrent crimes in modern North Carolina history would have to be the death of Sabrina Buie. The 11-year old girl was reported missing by her father on September 25, 1983, and her body was found the next day in a soybean field. Buie had been violently raped and then killed by having her panties forced down her throat with a stick. The murder rocked the small Robeson County town of Red Springs, and was considered so heinous that it even was even discussed by United States Supreme Court justices. It was no wonder that the community desperately wanted the perpetrators to be behind bars, but unfortunately, the zeal to find those responsible for the tragic death of Sabrina Buie led to two men being wrongfully convicted for her murder. At a court hearing on September 2nd, 2014, Superior Court Judge Doug Sasser declared Henry McCollum and Leon Brown innocent of the charges they were convicted of 30 years ago and ordered them freed from custody. They were released on September 3rd to start new lives in freedom.

The two men, half-brothers, have spent all of their adult lives in prisons since they were convicted of Buie’s murder in 1984; McCollum has the dubious honor of being the longest-serving death row inmate in North Carolina’s history. Henry McCollum was 19 years old, and Leon Brown was only 15 years old, when they were arrested in Red Springs, NC. The primary evidence against the brothers were two detailed confessions. Brown and McCollum have stated that they were coerced into confessing to the homicide, a claim that is supported by their low IQs – Brown and McCollum both suffer from developmental disabilities, and struggle with basic skills such as reading and writing.  The confessions themselves were written out by police and then signed by the two brothers. The confessions were the main evidence for the case against the men, even though both McCollum and Brown recanted their confessions shortly after they were obtained. In McCollum’s case, he recanted his confession a whopping 226 times. No physical evidence connected the brothers to the crime. However, evidence from a cigarette butt left at the crime scene was discovered by the Innocence Inquiry Commission and was tested in relation to the Buie case, and the DNA was traced to another Robeson County man named Roscoe Artis. Artis has a lengthy criminal history which includes sexual predation, and is currently serving a life sentence at Warren Correctional Institution for the rape and murder of a young girl that was committed in Red Springs a month after Buie’s death. Artis was a known sex offender at the time of Buie’s murder and lived next to the field where the victim’s body was discovered, but was never investigated by police. It is certainly true that similarities in how a crime was committed are not always enough to lead to a conviction, but the fact that Artis was not investigated in connection with Sabrina Buie’s death after his arrest for a comparable offense defies rational explanation. Artis himself admitted that McCollum and Brown were innocent of the charges against them when questioned by staffers at the state Innocence Commission in July of this year.

Local prosecutors did not contest the release of Brown and McCollum. The acting Robeson County District Attorney went as far as to quote from the ethical rules governing the conduct of prosecutors, stating that, “The prosecutor’s duty is to seek justice, not merely to convict.” When questioned by the press, Joe Freeman Britt, the district attorney responsible for prosecuting the case against McCollum and Brown, called the release of McCollum and Brown “a tragic day for justice in Robeson County.” Britt was once noted by the Guinness Book of World Records as being the deadliest prosecutor in the world due to how often he sought capital punishment. No one likes to be proven wrong, but it seems that the more gracious thing to do on an occasion like this would be to not say anything at all, rather than claim that Judge Sasser and the sitting Robeson County District Attorney are making a mistake by not being parties to a horrifying miscarriage of justice.

My heart goes out to Leon Brown and Henry McCollum. It may end up being hard for the pair to adjust well to life on the outside, given their mental handicaps and that they have spent their adult years in prisons, where their daily routines were set by corrections officers. McCollum and Brown may never be able to live normal lives because of their time in prison. That is what makes the circumstances of this story all the more regrettable – in trying to bring justice to a girl who lost her life, authorities essentially stole the lives of two innocent people. Nevertheless, Judge Doug Sasser made the right decision in this case, and I can only hope that Brown and McCollum are able to find peace in the future. It is more than they deserve after the suffering they have endured.