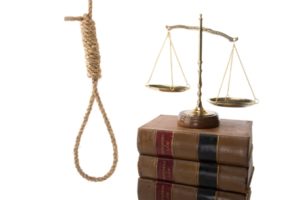 N.C. Supreme Court Justices to Rule on the RJA

The Racial Justice Act was a groundbreaking piece of legislation, the only law of its kind in the United States. Passed in 2009, the law allowed people convicted of murder to have their capital sentences reduced to life in prison if they could demonstrate that their capital sentence was the result of racial bias. Although the Racial Justice Act was overturned by North Carolina’s Republican-controlled General Assembly in 2013, the law is still having some effect.

The N.C. State Supreme Court is reviewing the cases of four inmates in the North Carolina Department of Correction whose sentences were modified under the act. Quintel Augustine, Tilmon Golphin, Marcus Robinson, and Christina Walters all had their death sentences commuted to life in prison without parole as the result of findings under the Racial Justice Act. The four were the only death row inmates to have been able to put their cases before a judge under the 2009 legislation. Augustine, Robinson, and Golphin are black men; Walters is a Lumbee woman. The Supreme Court will ultimately rule on whether the decision to alter the inmates’ sentences was valid. Only a handful of North Carolina’s 153 death row inmates refrained from challenging their sentences under the RJA. Those cases are still pending in courts across the state. Depending on how the Supreme Court rules on the four RJA cases before it, it could impact the suits that were filed prior to the Act being repealed.

Opponents of the Racial Justice Act argued that the law was merely an indirect way to overturn the death penalty in North Carolina. But this obscures the larger issue of execution and its use here in the Tar Heel State. But shouldn’t it be difficult to sentence someone to death? If the State is going to take the step of ending someone’s life as punishment for a crime, shouldn’t the accused be given every possible consideration?

Although the death penalty is still legal in North Carolina, the state has not executed an inmate since August 2006. Concerns about lethal injection procedures led to a de facto moratorium on the practice. North Carolina used a cocktail containing three drugs in its execution protocols: the mixture was supposed to render an inmate unconscious before paralyzing all of their muscles, resulting in cardiac arrest. This was argued as being cruel and unusual punishment should the mixture fail to result in knocking out the subject, or if the drugs were not properly administered. As lethal injection is the only approved method of execution in N.C., a prohibition on the three-drug protocol effectively outlawed the death penalty in the state.

In October 2013, a new single-drug lethal injection protocol was signed into law, making use of the chemical pentobarbital. Allegedly, this single drug protocol is supposed to eliminate concerns of cruel and unusual punishment. Medically, pentobarbital is used as a sedative and anti-convulsant. At higher dosages, it causes cardiac arrest. Most of the manufacturers of pentobarbital are located in European countries, and those companies often refuse the sale of the drug to states in which the death penalty is legal. States are able to get supplies of the drug from domestic compounding pharmacies, but there is some indication that pentobarbital and other lethal injection drugs produced domestically is not as pure as supplies from Europe.

Look at two executions from January of this year: Michael Wilson of Oklahoma and Dennis McGuire of Ohio. Wilson’s last words after being administered his domestically produced lethal injection were “I feel my whole body burning.” McGuire gasped and choked after he was dosed. Being strapped to a table and having drugs that cause those kinds of reactions forcibly injected into someone’s body sounds a great deal like cruel and unusual punishment to me.

In the end, these arguments might end up being moot. Jurors in North Carolina sentenced only one person to death in 2013, and no capital sentences were handed down in this state at all in 2012. The death penalty may be legal on the books, but it certainly seems to be falling out of favor in the Old North State. But the waning popularity of capital punishment does not erase the very real racial bias in its administration. Across the United States since 1976, black defendants convicted of killing a white victim were executed at a rate 13 times higher than white defendants convicted of killing a black victim. 13 times. 1300%.

The Racial Justice Act was historic. It gave individuals sentenced to the harshest punishment in American jurisprudence the ability to question the fairness of that decision in ways that go beyond the two-dimensional world of appeals and motion hearings. The RJA was lauded by legal scholars and death penalty opponents across the nation, and the General Assembly killed it before there was an opportunity to gain real traction.

The North Carolina Supreme Court’s decision regarding cases filed under the RJA could end up being one of the final nails in the coffin of the barbaric, outdated practice of capital punishment. After all, time – and resource-consuming litigation certainly makes the process of sentencing someone to death become more trouble than its worth. It sickens me that we’re already more than a decade into the 21st century, and I live in a jurisdiction that is still a party to legal execution. However, I take comfort in the fact that my fellow N.C. citizens seem to be losing their taste for state-sponsored murder as well, that capital punishment may go out not with a bang, but with a whimper. I’ll certainly be keeping my eye on the Supreme Court in the mean time.