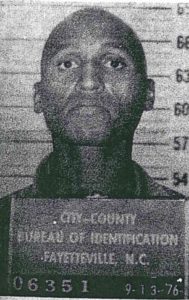 Wrongful convictions for murder are tragedies, not only because they rob an innocent person of years of their life, but because when they are uncovered they often rob families of the comfort of knowing that their loved ones have found justice. They rob the criminal court system of credibility and they rob people of faith that justice can be done inside a courtroom. Make no mistake – right now, there are innocent people locked up in prisons here in North Carolina, and in every other state in the Union. However, one more person who was wrongfully convicted is walking free.

Joseph Sledge, now a 70 year old man, spent 38 years behind bars for a crime he did not commit. He was convicted in 1978 of the murders of Ailene and Josephine Davis, a mother and daughter who lived alone together in Bladen County, North Carolina. The two women were brutally stabbed to death in their rural home. Both women had been beaten, and the daughter, Ailene Davis, had been sexually assaulted prior to her death. It was a heinous case that shocked their small, close-knit community.

Authorities found a convenient suspect for the homicides in the person of Mr. Sledge. Just a single day prior to the murders, Sledge had escaped from a prison camp (located approximately four miles from the victims’ home) where he was serving a four year sentence for a felony larceny charge. After his escape, Sledge stole a car and was picked up by law enforcement in Dillon, South Carolina, over 50 miles from where the murders took place. All in all, the flight to South Carolina seemed like the actions of a guilty man, and Sledge surely was not helped by his prior criminal record.

From the outset, the Davis murders were mishandled by investigators, who seemed keener on pining the crime on a convenient suspect than in actually finding the real killer. Almost a hundred fingerprints were lifted from the crime scene at the Davis residence and none of those prints matched Sledge’s. Head hairs were found on the victims’ bodies, but Sledge has kept his head shaved bald for decades, including prior to the murders. And yet, even though the evidence contradicted the idea that Joseph Sledge had committed the murders, the prosecution moved forward and managed to obtain a conviction, largely due to the vicious nature of the crime and the testimony of two inmates at the county jail who allegedly heard Joseph Sledge confess to killing the Davis women. DNA testing was not available at the time of Sledge’s initial trial and conviction, but once the testing became more routine, Sledge spent nearly twenty years begging to have the hairs tested. The head hairs collected from the victims’ bodies were not tested in that time because the evidence had been lost some time between Sledge’s trial and his requests. It wasn’t until 2012 when a clerk in Columbus County was cleaning the courthouse evidence vault stumbled across an envelope containing the hairs on a high, hard to reach shelf within the vault.

Sledge is the eighth individual to be exonerated by the North Carolina Innocence Inquiry Commission, a first-of-its-kind state agency that looks at cases of proclaimed innocence that have exhausted the traditional court process of trial and series of appeals. Since 2007, the Commission has reviewed over 1600 applications for innocence proceedings. Sledge’s case went through an exhaustive eighteen month review by the Commission, and in December of last year, the Commission granted Sledge a hearing to consider the possibility of an exoneration. The three judge panel that reviewed Sledge’s case unanimously found him innocent of the murders of Josephine and Ailene Davis.

Part and parcel with his release from custody, Sledge was awarded $750,000 by the State for his 36 years behind bars. There is a good chance that Mr. Sledge will never have to worry about money again, thanks to this settlement. While this money will help to care for a man who is now in the twilight of his life, it can’t replace the life that he could have had if the criminal justice system had functioned properly in the first place. Don’t get me wrong – I think that the award is the least the State of North Carolina can do for a man who was wrongfully imprisoned for more than half of his life. At the same time though, the award works out to less than $3 an hour for every hour Sledge spent locked up.

Although I abhor the thought of wrongful convictions and I am saddened that Joseph Sledge lost so much of his life to a miscarriage of justice, I continue to be proud to live in a state with an Innocence Inquiry Commission. Even though our court system makes mistakes, it is important for people like Mr. Sledge that we take steps to correct them.