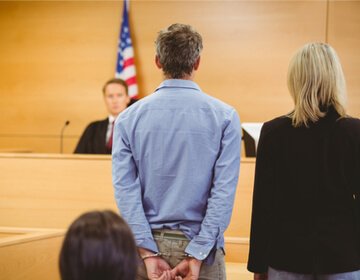 What You Can Expect When You Go to Trial

Most people understand that in North Carolina, as well as the rest of the U.S., everyone who is accused of a crime has the right to a trial by a jury of their peers. What many people don’t know is that if you are charged with a misdemeanor or traffic offense, you will first find yourself in trial by a single judge, not a jury.

In NC, not only are misdemeanor trials in front of a judge alone, they are also not recorded. That means that there is no court reporter taking down everything that is said. Instead of having a recorded jury trial for every case, if convicted there is an absolute right to appeal to a completely new trial. New trials can be thought of as “do overs”.

Superior Court trials are presided over by judges whose job it is to function as gatekeeper of what evidence a jury gets to hear as well as referee between the parties. In Superior Court, the jury gets to make the decision whether to find a defendant guilty, not guilty or guilty of some lesser offense. Jury trials are recorded and appeals from Superior Court are made to either the NC Court of Appeals or the NC Supreme Court.

It is considerably easier for a defense lawyer to prepare for a trial in District Court in front of a judge than it is to prepare for a jury trial in Superior Court. Jury trials also generally take days as opposed to bench trials, or trials in front of a judge, which typically take a few hours. As a result of this difference in time that is required, it is much less expensive to hire a criminal defense attorney to represent you in District Court than it is to hire that same lawyer in Superior Court.

At Kurtz & Blum, PLLC, we have a tremendous amount of trial experience in both District and Superior Court. We have been trying cases in the Wake County Courthouse in downtown Raleigh since 1998. Our experienced criminal justice lawyers have over four decades of trial experience combined. If you are facing criminal charges, we can help. Call us today at (919) 832-7700.

“Regarding a homicide case that resulted in probation for our client: “On behalf of our family, we thank you and your entire staff for their efforts regarding our son. Words cannot express our gratitude for a brilliant and tenacious effort regarding his defense. We’re proud to have you as our attorney.”